Tim Cook's Non-Answer On Whether Apple Wants To Buy Tesla 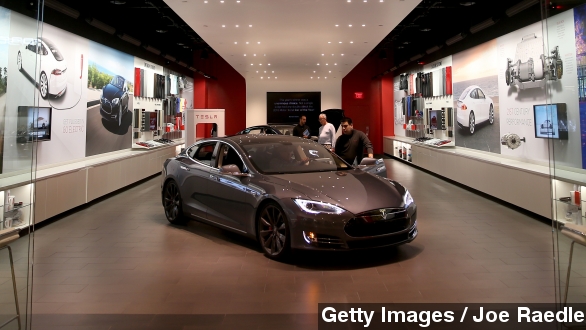 Apple shareholders want the company to buy Tesla, and it’s not exactly surprising.

Apple CEO Tim Cook faced questions on whether Apple might acquire the car company at a shareholder meeting Tuesday.

Instead of answering, Cook talked about how excited he was for Apple’s CarPlay companion for iOS devices, and  wondered aloud if that was “a good way to avoid the question?”

We’ve been over this ground before. In February, Tesla CEO Elon Musk told Bloomberg the two companies weren’t planning mergers.

But all these polite non-answers mask an interesting game of talent chess.

Reports show Musk has successfully convinced some 150 Apple employees to go work for Tesla instead,

An outright purchase would certainly speed things along. Tesla Motors has done much of the heavy lifting to turn itself from an idea into a company actually shipping cars.

Apple hasn’t, as one analyst tells ABC. But if the company did want to get into cars, "they could shortcut things tremendously if they purchased Tesla."

And all this comes as Apple secures building permits and office space that might have something to do with cars.

If anything, it looks as if the two companies could compete more than cooperate in the near future. Apple, of course, has yet to confirm any plans to work on electric vehicles.