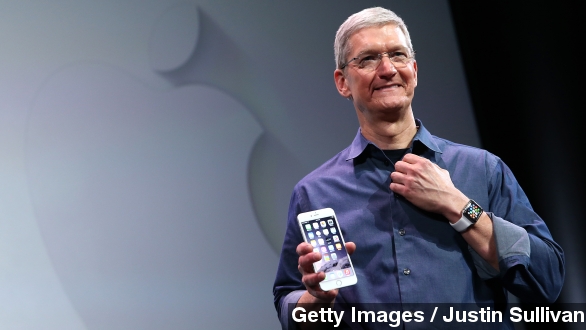 SMS
Tim Cook Made 8 Times Less Than Another Apple Exec In 2014
By Cliff Judy
By Cliff Judy
January 23, 2015
Tim Cook's total compensation more than doubled in 2014 to $9.2 million, but his pay was still less than four other Apple executives.
SHOW TRANSCRIPT

We now know what the face and leader of Apple made in 2014, and yes … it was probably more than you. A lot more.

In a notice of Apple's annual meeting of shareholders released Thursday, the company revealed Tim Cook's pay in 2014 was more than double the previous year at $9.2 million.

That total compensation includes $1.7 million in base salary with $6.7 million in bonuses. Interestingly, the company also pays about $700,000 for home and personal security for Cook as part of "a reasonable and necessary expense." (Video via ABC)

"We've been working incredibly hard for a long time on an entirely new product," Cook said during the unveiling of the Apple Watch in September. "And here it is."

Cook's had the unenviable task of succeeding one of the highest-profile and most beloved CEOs ever in the U.S. — Steve Jobs.

And several outlets appear to believe his pay was more than justified, with 2014 being arguably Apple's best year since Jobs died.

The company released the iPhone 6 and iPhone 6 Plus and announced the Apple Watch, which is expected to hit stores in March.

But you might be surprised to find out paywise, Cook is very much in the shadows compared to other Apple execs who report directly to him.

Former Burberry CEO Angela Ahrendts earned nearly $73.4 million in 2014, about eight times Cook's pay. Most of that — $70 million — was in stock. About half of that was Apple compensating Ahrendts for what she lost in Burberry stock when she left. (Video via Fortune, Burberry)

Three other Apple execs made more than Cook in 2014, but we're guessing Apple employees didn't have as much fun with them. (Video via YouTube / Martin T)

This video includes images from Getty Images and music by Broke For Free / CC BY NC 3.0.