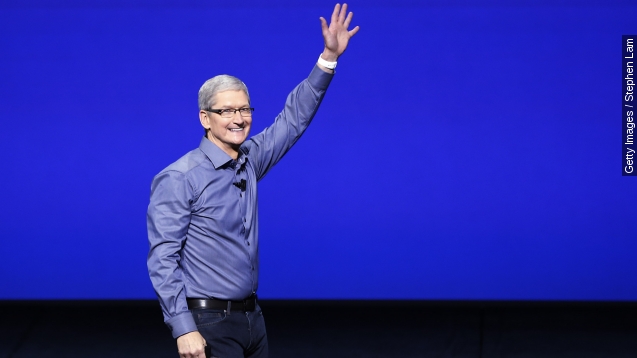 Apple CEO Tim Cook dropped a bunch of knowledge nuggets about the company and some of its more recent ventures at The Wall Street Journal's global technology conference.

For instance, Cook clued us in that right now Apple Music has 6.5 million paying subscribers, with a total of 15 million users on the site. (Video via Apple)

That's nowhere near Spotify's 75 million active subscribers (20 million of which actually pay for the service), but Apple's numbers aren't terrible considering the service is not even four months old and Spotify's been around since 2008. (Video via Spotify)

One of the main features that makes Apple Music stand out, according to Cook — and coincidentally our own Mikah Sargent — is "music that's curated by human beings." (Video via Apple)

Cook also talked about the new Apple TV, which will start shipping out at the end of next week. Preorders start Monday. (Video via Apple)

When the redesigned Apple TV was announced at the company's September event, one thing was apparent: Apple was looking to break into the gaming market with the hardware. (Video via Apple)

But Apple is actually trying to revolutionize live TV with the new device, too. Pushing for that change has proved more difficult, as the company's had a hard time securing contracts with some major content creators like CBS and 21st Century Fox. (Video via iFixit)

That doesn't seem to have swayed Cook, though. He told reporters at the WSJ event Apple TV has "developed an infrastructure to fix [a] terrible broken thing that none of us like." The broken thing being the way live TV has to be viewed — one channel at a time via a cable provider. (Video via XFINITY)

And here's one more tidbit from Cook's talk: "When I look at the automobile, what I see is that software becomes an increasingly important component of the car [of the future]. ... Autonomous driving becomes much more important."

He also mentioned the move from combustion to electric engines as being a big change the auto industry is undergoing. Which could be part of the reason why Apple's poached engineers from companies like Tesla and Mission Motors. (Video via Consumer Reports)

You can read or watch more from Cook's interview at WSJDLive on The Journal's website: WSJ.com.