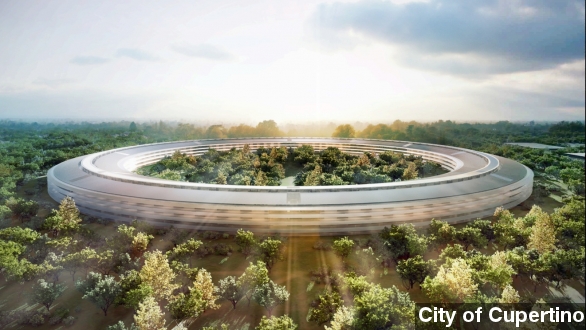 By Matt Picht
September 22, 2014
Apple CEO Tim Cook says the company's new Cupertino campus will be the greenest building on the planet, once it's completed.
SHOW TRANSCRIPT

Apple's new campus in Cupertino is still under construction, but the company's CEO Tim Cook has just promised that it will be the most environmentally friendly structure on the planet.

TIM COOK VIA YOUTUBE / ARMAND CZAPKOWSKI: "We're building a new headquarters that I think will be the greenest building on the planet. It'll be a center for innovation, and I think it's something that our employees want, and we want."

Cook's remarks were made during a Climate Change NYC discussion, part of a weeklong series of events on climate change centered around a U.N. summit in New York on the issue. (Video via People's Climate March)

The campus Cook was referring to — known as "Apple Campus 2" or, informally, the "Spaceship Campus," is expected to be finished sometime in 2016. Pitched by former Apple CEO Steve Jobs in 2011, the finished facility is projected to be 80 percent landscape and house its own green energy plant. (Video via YouTube / jmcminn, Technology Integration Services)

Cook's made no secret of his environmentalist bona fides in the past: he's previously touted the company's sustainable practices in an Apple commercial:

"We will work to leave the world better than we found it."

... and in a not-so-subtle dig at rival tech company Samsung, with whom Apple's been locked in a legal battle for years over tech patents.

But a Gizmodo writer notes Cook hasn't been forthcoming about the specifics of the spaceship's sustainability, adding: "If Campus 2 is actually the greenest building on the planet, that's fantastic. If Apple is cleaning and continues to clean up its supply chain, that's also wonderful. But talk is cheap."

Cook's comments come one day after an estimated 300,000 people marched through the streets of New York to demand action on climate change, and one day before 125 world leaders convene at the U.N. headquarters for the climate change summit.