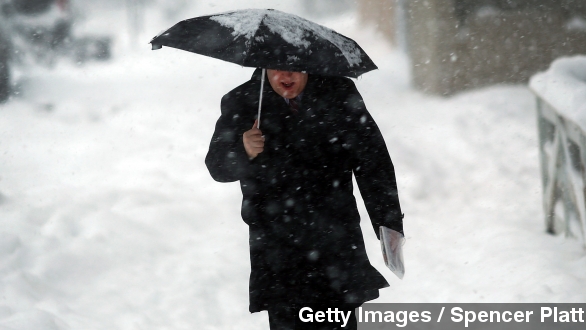 SMS
Thundersnow, Freezing Rain And Sleet: What's The Difference?
By Matt Moreno
By Matt Moreno
February 17, 2015
Thundersnow is rare but usually comes with large amounts of snow. Sleet bounces off surfaces, while freezing rain sticks to them.
SHOW TRANSCRIPT

The Midwest and Northeast have been getting their fair share of winter these past few weeks, with the Northeast getting pounded with some of biggest snowfall amounts in history. And it's all creating some pretty amazing natural phenomena.

That's what's commonly known as thundersnow — similar to the more common thunderstorm but with snow. AccuWeather explains it's all about instability, which is why it's so rare in the winter.

"The air near the ground needs to be warmer than the air aloft, yet cold enough to produce snow. This happens when storms intensify rapidly," AccuWeather reports.

Thundersnow, just like thunderstorms, are associated with heavier precipitation. One study from 2002 suggested thundersnow usually coincides with about 6 or more inches of snowfall. (Video via CNN)

"The lightning at night may well appear brighter because it's reflected by the snowflakes, but the snowflakes may muffle the sound of the thunder," BBC reported.

But this winter's troubles are stretching further than just snow and thundersnow. Freezing rain and sleet are also affecting the masses.

The difference between freezing rain and sleet is that freezing rain is rain when it hits the ground, while sleet is more like pellets of ice coming down. (Video via The Weather Network)

Freezing rain freezes on any surface that's 32 degrees or colder, meaning roadways, sidewalks and more can be particularly dangerous to maneuver on.