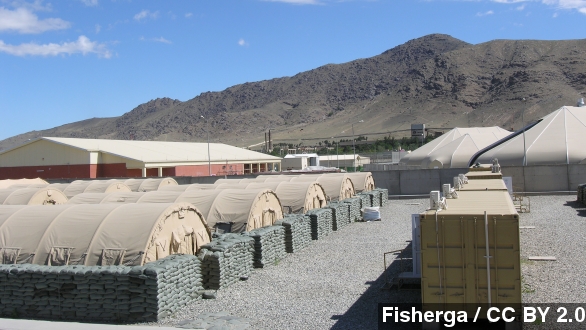 Three U.S. contractors and one Afghan national are dead after a shooting Thursday in Afghanistan.

The shooting happened Thursday evening on a base at North Kabul International Airport. Several sources say the gunman was an Afghan soldier or someone in an Army uniform, though those reports haven't been officially confirmed.

But if true, this would be another so-called "green-on-blue" attack, where Afghan soldiers or police officers turn their weapons on coalition forces. There have been fewer of these attacks in recent years, but this one comes just weeks after the U.S. and NATO officially ended their combat mission in the country.

Around 12,000 coalition troops, mostly from the U.S., are still stationed in Afghanistan and are focused on training the country's security forces.

Thursday was an especially violent day across Afghanistan: A suicide bomb targeting a funeral killed 17 people and injured 36 others, while a separate Taliban attack on a village killed 18, including seven Taliban soldiers.