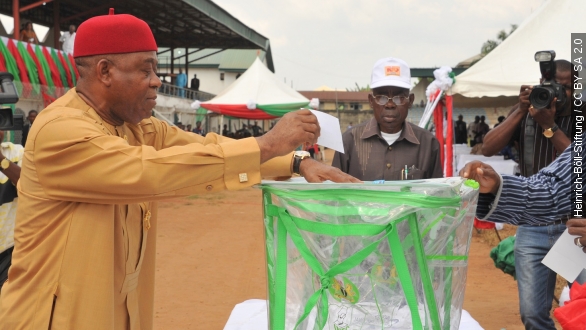 Voting has ended in Nigeria's crucial presidential and legislative election, and preliminary results are due Monday. (Video via Voice of America)

But while the country is being praised by the international community for carrying out largely peaceful elections, there are protests, allegations of wrongdoing and even threats of violence coming out of the country's oil-rich Rivers State.

Technical difficulties plagued the election process. A new system of voter cards and biometric scanners proved fraught with glitches, even causing President Goodluck Jonathan to stand around for 40 minutes before he could cast his vote. The delays meant thousands were unable to vote Saturday, so the election was extended into Sunday. (Video via Voice of America)

But protestors in the Rivers State called for the election to be annulled and run again, claiming opposition campaigners had been assassinated and that crucial election materials weren't delivered to the polls on time. (Video via TVC News)

The country's election commission confirmed that its offices in the Rivers State had been destroyed by the protestors, and there are worries the violence could spread.

"They're effectively alleging that this is the beginnings of an attempt by the ruling party, that's the Peoples Democratic Party, the party of President Goodluck Jonathan, to try and steal this election," reported Al Jazeera's Yvonne Ndege.

The race between President Goodluck Jonathan and former leader Muhammadu Buhari was already close going into the weekend, and analysts had been warning that only secure and credible polling could prevent fighting between the two camps.

Former U.S. Ambassador to Nigeria John Campbell said if the elections raised suspicion, "The consequence could be violence and political uncertainty at home and erosion in the credibility of democratic practices throughout the continent." (Video via Carnegie Council for Ethics in International Affairs)

But the country's National Human Rights Commission accused politicians and police of exploiting the tension, remarking that the "level of hate speech and violence" had spiked in the days before the election.

The threat of post-election violence comes just days after the country's military claimed a major victory against the terror group Boko Haram.

This video includes images from Getty Images and Chatham House / CC BY 2.0.