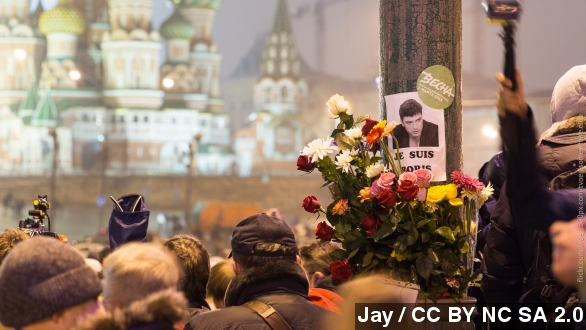 The murder of opposition leader Boris Nemtsov has sparked outrage both in Russia and internationally.

On Sunday, that anger turned to action in the form of a march in Moscow, with protesters taking to the streets outside the Kremlin. (Video via Nasha Niva)

A reporter for The Guardian says there are varying reports on turnout for the protests, from police saying around 7,000 to organizers estimating as many as 50,000.

An unidentified assailant shot and killed Nemtsov on a bridge in Moscow Friday night, ahead of Sunday's rally, originally planned to protest President Vladimir Putin's policies. (Video via RT)

Instead, the mood of the march was reportedly somber, with marchers mourning the 55-year-old and leaving flowers at the site of his murder. (Video via BBC)

A former deputy prime minister under Boris Yeltsin, Nemtsov was outspoken in his criticism of Putin, and especially his role in the ongoing conflict in Ukraine. (Video via Deutsche Welle, Radio Free Europe/Radio Liberty)

Although the march was largely peaceful, police arrested a Ukrainian member of parliament who was marching, reportedly in connection with a fire during a protest in the southern city of Odessa last year.