Those Mini-Pigs Sold On Craigslist Can Jump To 100 Pounds 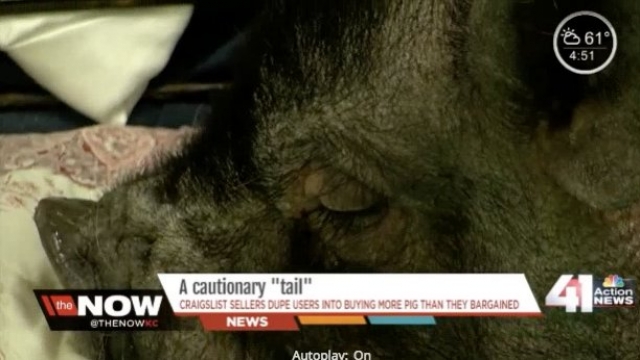 SMS
Those Mini-Pigs Sold On Craigslist Can Jump To 100 Pounds
By Ryan Biek
By Ryan Biek
February 18, 2016
Several Missouri pet owners say they were misled by Craigslist sellers who claimed the tiny pigs would stay small.
SHOW TRANSCRIPT

Demand for unconventional pets, like teacup pigs, is soaring. But many buyers in Missouri are getting way more than they asked for.

"The pig was advertised as a mini on Craigslist, and he was small at the time, and then he grew," animal welfare worker Barbara Poe told KSHB.

To 50 pounds in about seven months. A worker at an animal welfare organization told Newsy's partners at KSHB that jump in size forced the owner to give the pig up.

"Getting an animal off Craigslist, in some situations, may not be the best idea because they're not giving you all you need to know," Poe told KSHB.

Like how long pigs can take to fully grow. Another woman's pig grew to 100 pounds over five years.

"She was a teacup, and, you know, I was told she was going to be 25 pounds," owner Ann Varner told KSHB.

Instead of getting rid of her pig, she opted for a bigger apartment. Still, she says breeders misled her.

"You need to understand that pigs, especially –– they can be 60 pounds or 300 pounds, and you don't know what you're getting until they are five years old," Varner told KSHB.

The woman says "education is the utmost important thing" and recommends visiting the site Mini Pig Info if you're thinking of getting a tiny pig.