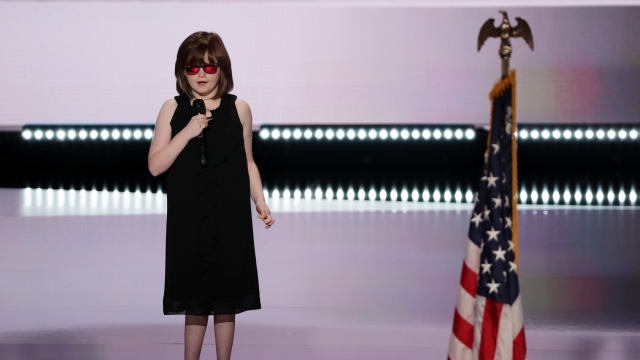 SMS
This Young Woman Sang The National Anthem At The RNC — And Killed It
By Ryan Biek
By Ryan Biek
July 19, 2016
Marlana VanHoose's performance of the national anthem wowed the crowd — and everyone on social media.
SHOW TRANSCRIPT

Marlana VanHoose blew away the crowd (and all of us on social media) with her rendition of the national anthem. And she got word she'd be performing only the day before.

A local Cleveland outlet notes the 19-year-old singer wasn't expected to live past her first year of life.

VanHoose was born blind — her optic nerve never fully developed. She was diagnosed with cerebral palsy when she was 2 years old.

Despite those harsh setbacks, VanHoose's website notes she was humming songs before she could talk. By the time she was 2, she was learning piano by ear.

All anyone seemed to be able to talk about — from political pundits to ESPN reporters and even her state's governor — was her voice.

VanHoose is likely pretty used to big-time performances by now. She sang at NASCAR races, women's college basketball games, game six of the 2015 NBA finals and other places.

ESPN even highlighted her relationship with the University of Kentucky basketball program and the team's success in games when she sang the anthem.

VanHoose sure started the Republican National Convention off with a bang.

The convention in Cleveland runs from Monday through Thursday, at the end of which Donald Trump is expected to be named the party's presidential nominee.