This Woman Is Suing Starbucks For $5 Million — Over Ice 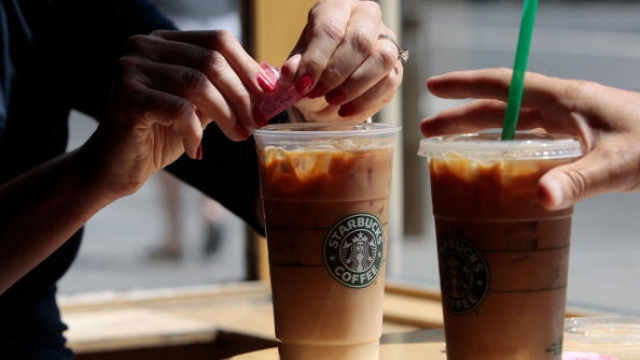 SMS
This Woman Is Suing Starbucks For $5 Million — Over Ice
By Ryan Biek
By Ryan Biek
May 2, 2016
The suit claims Starbucks is misleading customers because the amount of coffee or tea in the cup doesn't match the drink size advertised.
SHOW TRANSCRIPT

Starbucks is facing a $5 million lawsuit over the accusation that the coffee giant is putting too much ice in its iced drinks.

The class-action suit was filed by Stacy Pincus, a customer in Chicago, who's arguing the drink sizes Starbucks advertises aren't true to how much coffee is in the cup.

For example, the suit claims a Venti –– which is advertised as 24 fluid ounces –– is really 14 ounces of coffee, with the remainder being just ice.

Compare the hot and cold versions of the same drink. On Starbucks' website, a Venti-size hot version of a drink is advertised as 20 fluid ounces, while the cold version is 24.

Still, Pincus claims Starbucks is being intentionally misleading because even if 24 ounces is advertised, the total volume is still less than 24 ounces when the ice melts.

A spokesperson for Starbucks told CNN, "Our customers understand and expect that ice is an essential component of any 'iced' beverage. If a customer is not satisfied with their beverage preparation, we will gladly remake it."

Legal claims of underfilling drinks are nothing new to Starbucks.

In March, a suit claimed the company was liable for fraud because lattes were not filled to the rim of the cups.

It might sound ridiculous to some, but suits like this have cost companies millions of dollars in payouts before. Red Bull paid out $13 million years ago because consuming the energy drink didn't actually give customers wings, as its slogan stated.

The latest Starbucks suit is on behalf of everyone in the U.S. who's bought an iced drink in the last 10 years.

This video includes clips and images from Starbucks and Red Bull.