This Spherical Robot Is Supposed To Be The 'World's Safest Drone' 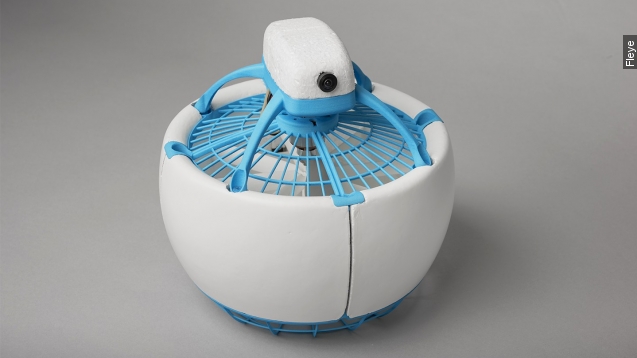 SMS
This Spherical Robot Is Supposed To Be The 'World's Safest Drone'
By Mikah Sargent
By Mikah Sargent
December 22, 2015
Between their heft and their exposed propellers, drones can be pretty dangerous. But if you cover the propeller, it could help limit risk of injury.
SHOW TRANSCRIPT

What with the pointy, spinning bits, drones can be a little intimidating. (Video via DJI)

Do you really want that thing flying at your face?

No? Well, how about this thing? It's called Fleye. Its pointy, spinning bits are shielded. And let's be real: It looks a lot friendlier than most drones.

In fact, it kind of reminds us of something: Weebo from "Flubber." Eh? Eh? The resemblance is uncanny.

"I'm convinced that in the future we'll have flying robots around us, helping us know our daily lives," said Laurent Eschenauer, CEO of Fleye.

"We wanted Fleye to be smart and autonomous so you don't have to be always piloting it. You can set up a simple mission through the mobile app and just enjoy the live streaming," said Fleye CTO Dimitri Arendt.

So, you could get the self-proclaimed "world's safest drone," or you could try dozens of other safety-enhanced drones.

"Ever try that with an open-bladed model? I wouldn't recommend it," said the narrator in a video from Vantage Robotics.

In other words, Fleye isn't the only "safest drone" out there. Be sure to weigh your options. (Video via Flyability)