This Robotic Surgeon Is Better At Surgery Than Its Human Counterparts 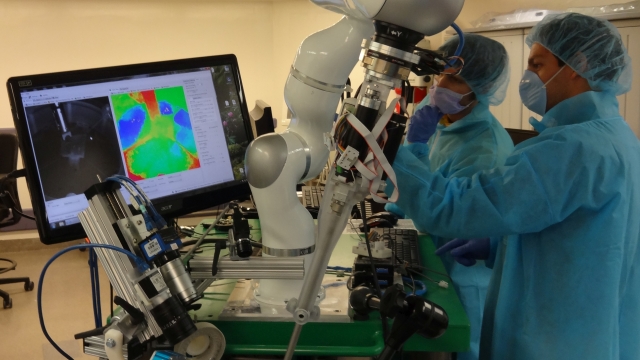 SMS
This Robotic Surgeon Is Better At Surgery Than Its Human Counterparts
By Evan Thomas
By Evan Thomas
May 4, 2016
A semi-autonomous surgical robot outperformed human surgeons and human-controlled machines in suture tests on pigs.
SHOW TRANSCRIPT

Do you trust a robot to sew you back up instead of a human?

Surgeons at Children's National Medical Center have developed a semi-autonomous surgical robot. They had it perform open surgeries on pigs, sewing together sections of bowel.

The robot was "supervised," meaning human minders wrangled its thread and watched to make sure it followed its fluorescent markers. But the robot did all of the suturing itself.

Surgeons compared its performance to their own expert work and to surgery with human-controlled robots.

"Probably the most surprising part was that when you actually compare that to current standards of practice, the machine does it better," said Dr. Peter Kim.

A robot poking its own way around soft tissues is unprecedented. Surgery on soft tissue is more difficult because it's more likely to shift around than, say, bone.

But researchers think taking the shaky human element out of the equation could reduce risks and complications of soft tissue surgeries — 45 million of which happen every year in the U.S.

This video includes clips from Science Translational Medicine and Intuitive Surgical, and images from Axel Krieger.