This Massive 1,109-Carat Diamond Is Going Up For Auction 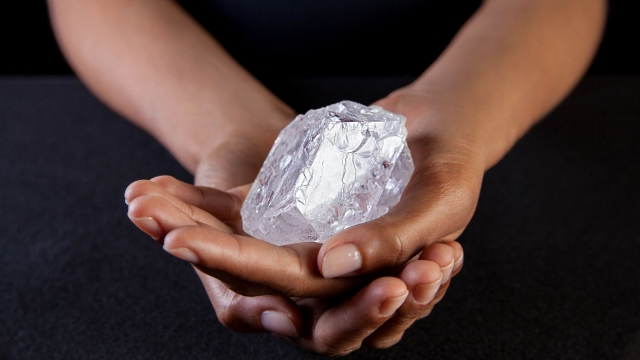 Here's a rock that will weigh you down. The biggest gem-quality rough diamond discovered in the past 100 years is going up for auction.

The diamond was found in a Botswana mine last year. It's called "Lesedi la Rona," which means "our light" in the country's national language.

Sotheby's says the diamond is about the size of a tennis ball, weighing a whopping 1,109 carats.

The only diamond ever found that was larger in size is the Cullinan diamond, which weighed more than 3,000 carats before it was cut down into nine smaller pieces. They were then built into the U.K.'s crown jewels.

But Sotheby's reports, when polished and cut, the Lesedi la Rona diamond could be the largest top-quality diamond ever, surpassing the Great Star of Africa, which weighs 530 carats.

The diamond, which could be as many as 3 billion years old, goes up for auction June 29.

This video includes images from Sotheby's and Getty Images.