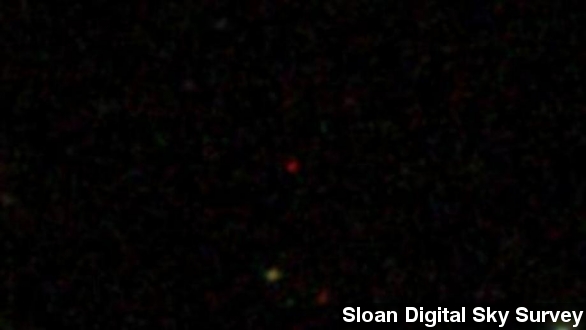 This little red dot astronomers have discovered is actually the quasar from a black hole approximately 12 billion times the mass of our sun. That's pretty hard to take in on its own, so allow us to help.

First off: No, it doesn't pose a threat to us. It's so far away that the light from the quasar — luminous spirals of gas going into the black hole — takes billions of years to get to us, and it's moving away from us as the universe expands. (Video via European Southern Observatory)

With that out of the way, we have to do some stretching to understand what something 12 billion times more massive than our sun actually means.

The first part of that is understanding our sun is already really, really big: 333,000 times the mass of our cozy little planet and about 1.3 million times the volume. (Video via NASA)

So when you take a sun with the mass of 333,000 earths, and the fact that your average quasar-associated black hole has the mass of a billion suns, it gets a little hard to comprehend.

Then you take into account that this black hole is 12 times bigger than average and comprehending the size of it just kind of seems like a lost cause. So how about its scientific significance?

Well, that might be a more worthwhile venture, seeing as it's not just super big, but the paper writes it developed super quickly — when the universe was less than a billion years old. That "presents substantial challenges to theories of the formation and growth of black holes and the coevolution of black holes and galaxies."

Considering the fact that NASA's WMAP satellite has estimated the age of the universe at around 13.7 billion years old, this black hole developed in the universe's infancy. (Video via NASA)

But even its age, and the amount of time it has had to suck in material doesn't explain its size or the brightness of its quasar — one of the researchers told National Geographic it's about 40,000 times brighter than the entire Milky Way.

So that leaves scientists looking for new theories to explain it. One of those theories is that right after the Big Bang, stars much more massive than any of the ones we know about existed and inevitably collapsed, leading to the black hole.

Right now, scientists haven't seen any evidence that stars that big ever existed, but the farther we look into space, the farther we can look into the past, thanks to the amount of time it takes for light to travel. (Video via NASA)

And NASA plans to look pretty far with the James Webb Space Telescope, Hubble's successor. NASA says it will be able to see as far as 13 billion years back, putting it as close to the start of the universe as scientists have ever gotten.

That's still a ways off, though: NASA plans to launch the JWST in October 2018.