This Is What An ISIS-Free 'Safe Zone' Could Look Like 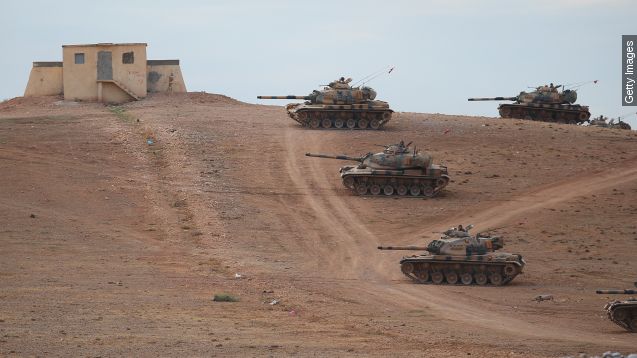 SMS
This Is What An ISIS-Free 'Safe Zone' Could Look Like
By Jake Godin
By Jake Godin
August 18, 2015
It's more of a concept than anything else right now, but what would an ISIS-free "safe zone" look like if it were implemented in northern Syria?
SHOW TRANSCRIPT

There’s talk of an ISIS-free “Safe Zone” in Syria backed by Turkey and the U.S. But what would that even look like?

Something like this — a roughly 60-by-30-mile chunk carved out of northwestern Syria. The only problem is ... it’s currently occupied by ISIS.

With the help of coalition airstrikes, Syrian opposition forces would remove ISIS from the area.

That area would then be used as a safe haven for civilians fleeing the Syrian regime and ISIS.

Turkey wants to keep any Kurds from entering the safe zone.

The U.S. appears only interested in clearing the area of ISIS. That’s it. No civilian safe haven, no safe zone.

The zone’s received backing by the powerful Ahrar al-Sham Islamist rebel group, and fighters from Al-Qaeda affiliate Jabhat al-Nusra have already started to leave the area.

But the U.S. and Turkey really don’t seem too close to agreeing on what to do with the area. (Video via U.S. Air Force / Senior Airman Krystal Ardrey)

“From Daesh, and from Syrian regime at the same time," Turkish Prime Minister Ahmet Davutoglu told BBC. "An area where civilians can stay without any fear of being attacked and killed."

BBC's reporter then asked, “And you will do that with the Americans?”

“With Americans and with the international community.”

“We’ve been pretty clear from the podium and elsewhere saying there’s no zone, no safe haven. We’re not talking about that here. What we’re talking about is a sustained effort to drive ISIL out of the region,” Deputy State Dept. Spokesperson Mark Toner told reporters during a press conference.

This video includes music from Brenticus / CC BY 4.0.