This GOP Race Could Create A Contested Convention 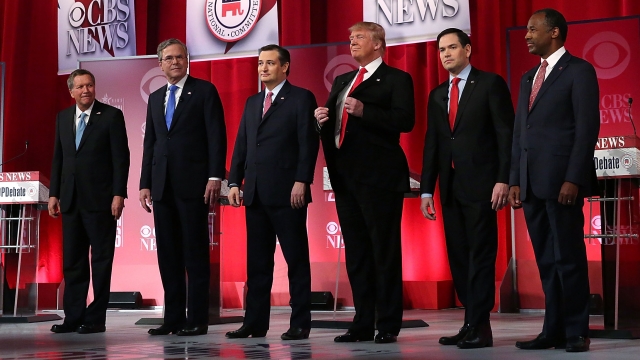 So it's pretty clear the GOP presidential race is getting pretty fractious.

"This guy will say anything! A nasty guy; now I know why he doesn't have one endorsement from any of his colleagues," Donald Trump said of Sen. Ted Cruz.

"I don't know how he knows what I said on Univision because he doesn't speak Spanish," Sen. Marco Rubio said.

But could a divided GOP cause a brokered national convention in July? At the very least, it's a possibility that's being increasingly considered.

To understand what that even means, here's a refresher on how the primary process works: As candidates win primaries and caucuses, they receive a certain share of or all of the delegates in those states. Those delegates then vote for whatever candidate they're pledged to at the convention.

A brokered or contested or multiballot convention only happens when no candidate has a majority of pledged delegates. This is when things get interesting.

Delegates will then keep voting until someone has more than 50 percent of the delegates, but they no longer have to vote based on their state's winner; basically it becomes a free-for-all. A brokered convention could even produce a nominee who until then hadn't been a candidate.

The problem with brokered conventions is they're pretty chaotic. Between votes, candidates and their supporters going around trying to garner more support. In an age where politics is already part entertainment, this spectacle might not look that great for the GOP.

The last time the GOP had a brokered convention was in 1948, which gave them New York Gov. Thomas Dewey who went on to lose the general election. Since then, due in large part to the primary and caucus systems, the national convention has been mostly ceremonial — a time for the nominee to lay out a vision or maybe a vice presidential pick to give one of their first big speeches.

But as the GOP continues to struggle to coalesce around one candidate, the possibility of a convention fight could become a reality.