This Fungus Is Bad News For The World's Bananas 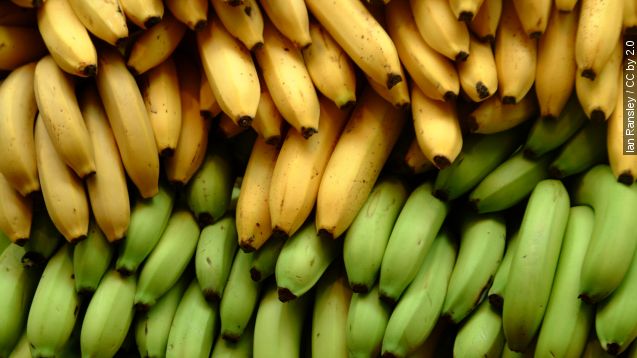 SMS
This Fungus Is Bad News For The World's Bananas
By Ryan Biek
By Ryan Biek
November 30, 2015
The type of bananas we know and love might die off. A disease has already hit about half the world's supply, and it's spreading.
SHOW TRANSCRIPT

The world's most popular fruit is in danger. A disease that targets bananas is making its way around the world.

The fungus known as Panama disease has been devastating banana production in many Asian countries like Taiwan, which now exports only 2 percent of the amount of bananas it did in the 1960s.

What's disappointing is history seems to be repeating itself.

Central America was devastated in the 1950s when pretty much the only commercial specimen of the fruit was hit by Panama Disease's race 1 strain.

Fortunately, the world discovered Cavendish bananas, a different specimen immune to the race 1 strain. Unfortunately, not so for Tropical Race 4.

Another problem is bananas are asexual, meaning a banana is exactly the same genetically as its parent. They don't experience beneficial mutations like other plant species.

A horticulture expert told Conservation magazine: "A dirty boot with a few grams of soil from an infested site in Asia planted inadvertently in a Latin American plantation is all it would take. It's just a matter of time."

Scientists are using cross-breeding tactics to create a banana that's disease-resistant. But that process is expensive and time-consuming.