This Doomsday Asteroid Could Be Major Scientific Boon For NASA 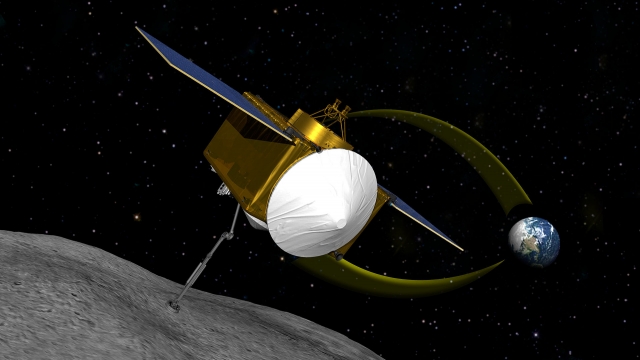 SMS
This Doomsday Asteroid Could Be Major Scientific Boon For NASA
By Ethan Weston
By Ethan Weston
July 31, 2016
NASA is sending a probe to an asteroid that could hit Earth in the 22nd century.
SHOW TRANSCRIPT

Next century, an asteroid called Bennu could fly between the moon and Earth, possibly threatening life on Earth. So of course, NASA wants to study it.

The asteroid was first discovered in 1999 and crosses Earth's orbit every six years.

To study Bennu, NASA plans on launching a probe in September — called OSIRIS-REx — which should arrive at the asteroid in 2018.

SEE MORE: NASA Doesn't Have Much On Its Exploration Calendar Anymore

While there, the probe will survey the asteroid's chemical makeup and geological history. Scientists also are hoping to learn how a newly discovered force can send asteroids speeding around the solar system.

That new force — the Yarkovsky effect — gives asteroids small thrusts from sunlight absorption and heat radiation. The effect causes the asteroid to change course in ways we can't accurately predict yet.

But NASA isn't going to Bennu just because of a possible collision in the future. It's also a great opportunity to learn about a rare type of asteroid formed in a young solar system.

Because it was born in the early days of our solar system, Bennu is rich in carbon materials, just like the asteroids that slammed into a young Earth. The kind that might have seeded our planet with the organic materials needed to produce life.

There's really only a 1 in 2,500 chance that Bennu hits Earth in the 22nd century. But we're bound to get unlucky someday, and this type of research just might save us in the end.

This video includes clips from NASA and the American Museum of Natural History.