This Device Keeps Hearts Beating On Their Way To Transplant 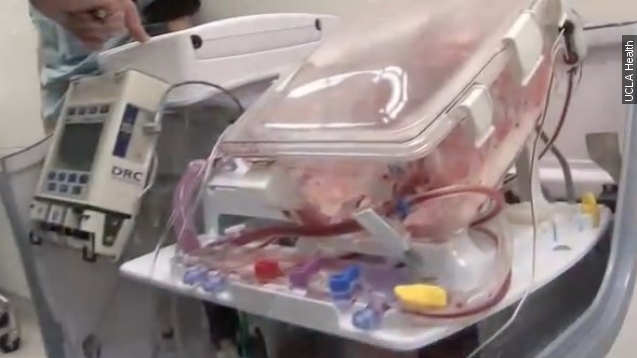 SMS
This Device Keeps Hearts Beating On Their Way To Transplant

By Ryan Biek
September 1, 2015
The TransMedics "heart in a box" revives stopped hearts so they can be transplanted. Now, the deceased are eligible donors.
SHOW TRANSCRIPT

Heart transplants usually come from brain-dead donors. That's because doctors have long said a heart taken from a deceased patient can be too damaged or deteriorated by the time they can get to it.

Enter the so-called "heart in a box" from TransMedics, a device that connects a heart to an oxygen and nutrient supply. Doctors say it could make a big difference in how many viable hearts could be eligible for transplants. (Video via UCLA Health)

Experts say the donated heart supply could go up by as much as 30 percent, according to an article in MIT Technology Review. That's a big deal because advanced heart failure affects more than half a million Americans.

Without the device, a heart had to reach its new host within six hours. With the device, that window doubles.

But not only is it expensive at $250,000, it raises ethical questions. For example, how long should doctors wait after a donor dies to remove the heart?

There have reportedly been at least 15 successful transplants in the U.K. and Australia using the "heart in a box" device. In the U.S. though, it's still awaiting approval.