This Defendant Wasn't Wearing Pants, And The Judge Was Livid 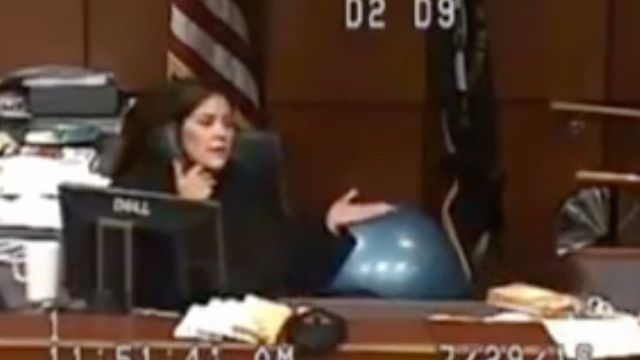 SMS
This Defendant Wasn't Wearing Pants, And The Judge Was Livid
By Newsy Staff
By Newsy Staff
August 1, 2016
Judge Amber Wolf called up jail officials and demanded an explanation in the middle of the hearing.
SHOW TRANSCRIPT

A Kentucky judge was none too pleased when a defendant walked into her courtroom without pants on — all because the jail supposedly refused to give her any.

"Can we get her something to cover up with? Anything? Anything? I don't care what it is," Judge Amber Wolf said. "Am I in 'The Twilight Zone' right now? What is happening?"

SEE MORE: Inmates Break Out Of A Jail Cell To Rescue A Guard

The woman, taken in on a bench warrant for a 2014 first-time shoplifting charge, told Wolf that she was denied jail-issued pants and feminine hygiene products for the several days she was there.

But jail officials say while it's tough to see in the video, the woman was actually wearing shorts — they were just covered by a long shirt.

A spokesman for Metro Corrections told The Courier-Journal: "The judge drew a conclusion she didn't have pants on and didn't do anything to confirm that. If we had taken somebody over with no pants on we should be held responsible. We didn't."

Jail officials also said not giving the woman jail-issued pants was standard procedure for anyone who'd only been in custody a few days.

A spokesperson told WDRB: "This is pretty standard that when individuals are arrested, they remain in the clothing that they've been arrested in. Especially for the first 72 hours."

The woman was released with time served and a $100 fine after Wolf threw out her original 75-day sentence.