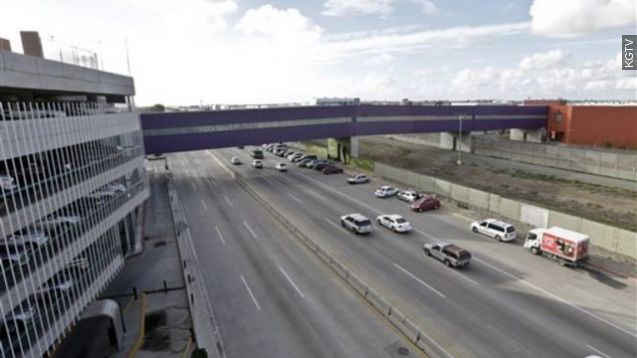 An estimated 59 million people travel back and forth from San Diego and Tijuana each year. That makes it the most congested land border in the Western hemisphere.

But this bridge could change that. This is the Cross Border Xpress in San Diego. The Xpress terminal, set to open Wednesday, is basically a giant bridge with a security check on each side. (Video via KGTV)

In the past, passengers arriving to the Tijuana International Airport had to drive 15 minutes to the nearest land crossing to gain entry to San Diego. Now, they pay just $18 to walk the 390-foot bridge onto American soil. It works the same way for people in San Diego who want to fly out of the Tijuana airport. Just park out front, pay for a ticket to cross and off you go.

The hundreds of thousands of people sitting in their cars listening as the local radio station delivers expected border wait times may be wondering why something like this wasn't built sooner.

It could be due to the fact that construction like this is super uncommon. There's only one other cross-border airport terminal like this in the world. It's between Basel, Switzerland, and France's Upper Rhine region.

Which, quite frankly, is a great location for something like this. Under an agreement, people in Europe can travel freely between countries without any strict border controls.

That's not really the case between Mexico and the U.S. It's no secret that border control and immigration are hot topics right now.

"I will build a great, great wall on our southern border, and I'll have Mexico pay for that wall," Donald Trump said as he announced his candidacy for president.

But officials close to the project tell Newsy's partner KGTV U.S. Customs and Border Protection officers will ensure only people with valid passports enter the country.

"It's probably more secure because it's been designed from the ground up with security in mind," San Diego County Supervisor Greg Cox said.