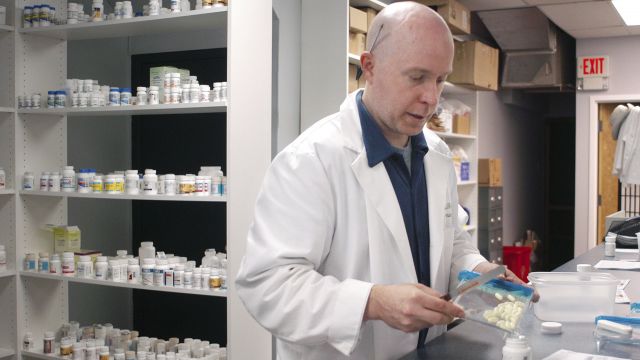 Researchers at the University of Missouri are studying how a commonly prescribed beta blocker could be used to treat individuals with autism.

"There was a study done in the 1980s that suggested a social and language benefit with this blood pressure drug, propranolol," Dr. David Beversdorf said.

Propranolol has been used to treat high blood pressure and other cardiovascular diseases since the 1960s. Dr. David Beversdorf and his colleagues wanted to explore other possible uses for the drug.

In their study, individuals with autism who took the drug instead of a placebo showed higher scores in social skills, such as eye contact, nonverbal communication and staying on topic.

"We were initially looking at it because of its use for test anxiety. That's exactly the drug people take for public speaking anxiety, performance anxiety. ...  And then we started to look at it in autism because they have flexibility issues with social interaction," Beversdorf said.

Propranolol is currently FDA-approved to treat a lot of things. Autism is not one of them.

An Autism Treatment Network spokesperson said the organization welcomes the research but also warned it's still too early to start prescribing the drug to people with autism.

Researchers plan to begin a federally funded clinical trial this fall. Beversdorf says the trial could take up to four years to complete.

This video includes images from Getty Images and Garzfoth.

Correction: A previous version of this video said the upcoming trial will involve early-intervention therapies, which are actually part of a separate private trial.