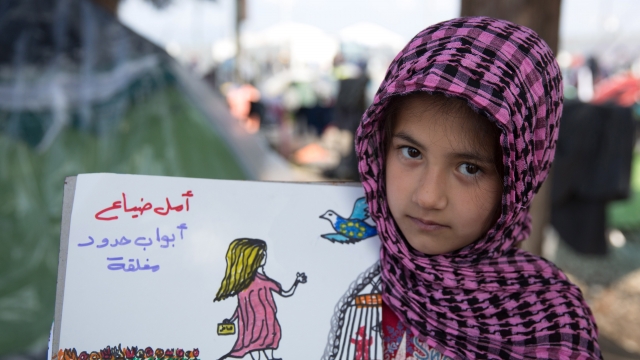 SMS
This 8-Year-Old Refugee Uses Drawings To Show Her Journey From Syria
By Melissa Prax
By Melissa Prax
May 8, 2016
One Syrian refugee drew pictures of her family's trip from Aleppo to a camp at the Greek-Macedonian border.
SHOW TRANSCRIPT

Ever wonder what a Syrian refugee's trip from war-torn Aleppo to a camp in Europe looks like?

This 8-year-old refugee's drawings give a glimpse inside her and her family's journey to Greece.

Shaharzad Hassan is one of nearly 10,000 refugees waiting at the Greek-Macedonian border.

But the border, a common migrant passage into Europe, has been closed since February — leaving refugees in limbo.

Her drawings reflect her life in Syria. They show Syrian President Bashar al-Assad surrounded by money as Syrian aircraft drop bombs outside, ISIS pushing out residents as pro-Syrian fighters lie dead next to Syrian flags, and a crowd of Syrian people surrounding an aid worker for food and other necessities.

They also show her family's boat trip across the Aegean Sea — a journey that's killed hundreds of refugees since the start of 2016.

And finally their arrival in Greece.

The saving grace for Shaharzad seems to come from Greece, the European Union and Kurdish forces. She draws them all holding torches of freedom.

This video includes images from Getty Images and a clip from the United Nations.