This 6-Year-Old Boy Just Got His Lifelong Wish ... To Be A Garbage Man 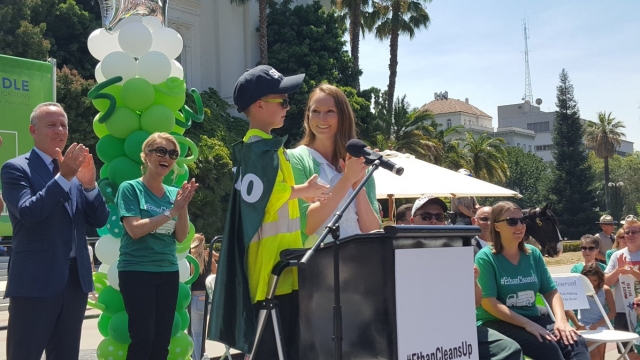 SMS
This 6-Year-Old Boy Just Got His Lifelong Wish ... To Be A Garbage Man
By Lindsey Pulse
By Lindsey Pulse
July 28, 2016
Ethan Dean, 6, got his own garbage route for a day, and hundreds of supporters met him at the state capitol. He is battling cystic fibrosis.
SHOW TRANSCRIPT

One of 6-year-old Ethan Dean's favorite things to do is watch the garbage truck make its rounds. And on Tuesday, he got to fulfill his dream of riding around in that truck to collect trash.

"Well, it's an unusual wish," Michelle Flynn, who works with the Make-A-Wish Foundation, told KOVR. "Like I said, he loves trash, so he's gonna learn all about it tomorrow."

Ethan was diagnosed with cystic fibrosis when he was just weeks old, according to The Sacramento Bee.

Since Ethan's future is uncertain, his parents want to give him as many good memories as they can.

So the Make-A-Wish Foundation made Dean's dream come true for a day and gave Ethan his very own garbage route.

As part of the event, Ethan also got his own garbage man outfit and sat shotgun on a garbage truck. Three superheroes made an appearance along the way with lessons about about recycling.

The route ended at the California Capitol where hundreds of supporters met Ethan and he had his own news conference.