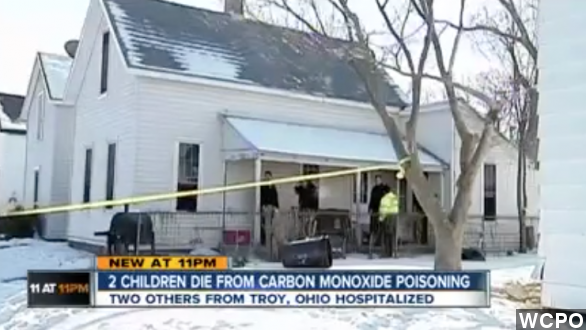 SMS
Third Child Dies From Carbon Monoxide Leak In Ohio
By Ben Lawson
By Ben Lawson
March 1, 2015
Three teenagers have died and an 8-year-old remains in critical condition after getting carbon monoxide poisoning in their home Friday.
SHOW TRANSCRIPT

A third Ohio child has died after being exposed to high levels of carbon monoxide earlier this week.

Four children were found unconscious in their Troy, Ohio home on friday. Two of the children, 13-year-old and 14-year-old sisters, died later that day. The third child was also 13. An 8-year-old cousin remains in critical condition. (Video via WEWS)

A faulty furnace is reportedly what caused the leak. Carbon monoxide is a colorless and orderless gas that is created when certain fuels don't burn completely. The Centers for Disease Control and Prevention says an average of 430 people die from carbon monoxide poisoning each year.

A relative called an ambulance Friday after finding found the children in bed and unresponsive. They had reportedly been sick for several days.

By the time firefighters arrived at the home, all four children were unconscious and in cardiac arrest. Four firefighters also had to be treated for carbon monoxide exposure.The children were living with the grandmother, who was in the hospital for pneumonia at the time. (Video via WCPO)

A neighbor told WKEF, "They were very nice kids. Very respectable kids. If not, grandma was on it."

Authorities are reportedly considering whether criminal charges are called for.