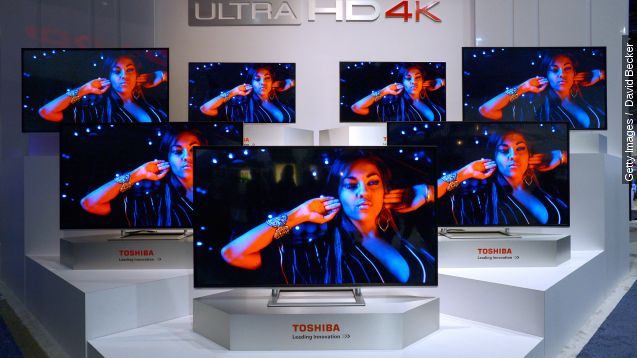 SMS
Things Are Bad For Toshiba Right Now
By Matt Moreno
By Matt Moreno
December 21, 2015
The Japanese-based company is cutting 6,800 jobs and selling off its TV division ahead of an expected $4.5 billion loss.
SHOW TRANSCRIPT

Once a leader in manufacturing televisions and other consumer electronics, Toshiba is cutting nearly 7,000 jobs worldwide after projecting a $4.5 billion loss for the fiscal year.

Those cuts will impact the personal computer, video product and consumer electronic divisions, allowing Toshiba to focus on its nuclear power plant division. (Video via Toshiba)

The company also announced it's selling off what's left of its TV division, making a deal with Hong Kong-based Skyworth for $25 million. Toshiba, in a press release, called the deal "negligible" in relation to its impact on the company's financial results. (Video via Skyworth)

The job cuts and net losses, by and large, stem from the company's $1.3 billion accounting scandal. Toshiba admitted in mid-2015 that it lied about profits for several years. (Video via New China TV)

Since then, the Japanese-based company has taken a serious hit.

"We're taking what has happened very seriously and would like to apologize from our hearts," Hisao Tanaka said.

Toshiba's president and CEO, Hisao Tanaka, resigned in July, and as the deal with Skyworth shows, the company's been under massive restructuring.

Toshiba stopped making TVs for the U.S. market in January 2015. This new deal gives Skyworth permission to use the Toshiba brand name in Asia with the exception of China. (Video via Toshiba)

The Guardian reports the company's stocks have fallen by 40 percent since the scandal broke in April.