These Recommendations Say You Shouldn't Worry About Eating That Steak 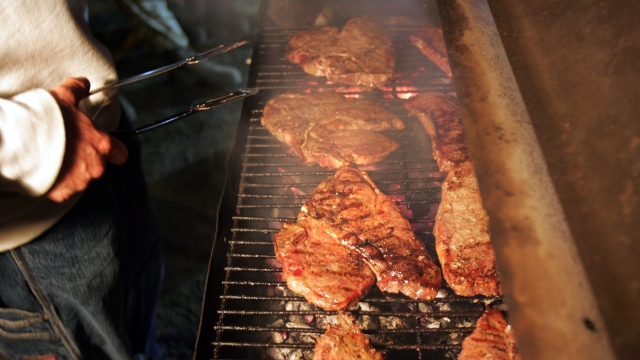 SMS
These Recommendations Say You Shouldn't Worry About Eating That Steak
By Ryan Biek
By Ryan Biek
May 23, 2016
The guidelines have started a fierce debate among public health workers in the U.K.
SHOW TRANSCRIPT

How much fat is OK to eat? A new report urging people to eat food in "its natural form, however much saturated fat it contains" has sparked a fierce debate among British public health workers.

The U.K. has officially promoted low-fat diets since 1983.

People have been told to watch out for saturated fat, which can be found in foods like beef, pork, butter and cheese.

But a new report from two health charities argues, in the process, officials have advised people to base their meals on carbohydrates, a food source the charities say can lead to a higher risk of Type 2 diabetes.

Citing studies from the Harvard School of Public Health, the University of Cambridge and other institutions, the health charities argue saturated fat isn't linked to an increased risk of heart disease, stroke or obesity.

And the report said it's possible if the public had been advised to eat fattier foods in their "natural form instead of unnaturally man-made low-fat foods for the past 30 years," the UK would have lower rates of obesity, heart disease and Type 2 diabetes.

However, health officials have called the charities' report "irresponsible" and say the research's use of "selective studies risks misleading the public."

But health officials' reputations have come under fire, too. The health charities' have argued almost half of the people who came up with a recent dietary guideline image for the U.K.'s Department of Health were also members of the food and drinks industry.

This video includes images from Jamie / CC BY 2.0 and Public Health England.