These Little Organs Could Be Big For Stem-Cell Research 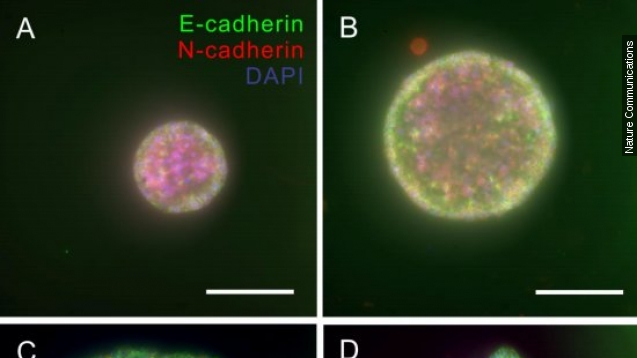 SMS
These Little Organs Could Be Big For Stem-Cell Research
By Ryan Biek
By Ryan Biek
August 4, 2015
Three-dimensional organs are the latest in stem-cell research, and they reveal where organ development goes wrong.
SHOW TRANSCRIPT

What is an organoid? It's a smaller version of an organ, a tiny model created from stem cells.

Some researchers are working on growing body parts, like skin, for transplants. But two recent studies seem less like science fiction and could end the controversies surrounding stem cells. (Video via Wake Forest Baptist Health)

But first, some background.

"While skin cells protect your body, muscle cells contract, and nerve cells send signals; stem cells do not have any specific structures or functions. Stem cells do have the potential to become all other kinds of cells in your body," said a narrator in a TED video. (Video via TED)

Organoid milestones have already been achieved, like scientists creating working heart tissue –– albeit two-dimensional sheets of it. (Video via Vienna University of Technology)

But Dr. Bruce Conklin and his fellow researchers at the universities of California-Berkeley and San Francisco, recently discovered how to make these heart models three-dimensional.

Conklin compared building a microchamber of a 3-D heart to a hot-air balloon slowly filling up.

This research gives scientists a better understanding of not only how heart cells come together, but also the order they're applied and how they replicate.

"You have to realize that the genomes inside every single cell in your body are essentially the same. It's just a matter of which genes are turned on and off that really make the difference between them so that if you force the genes on that are going to be like a different cell type, then the cells start taking on that identity, and then that becomes self-reinforcing," Conklin says.

"Remarkably that blueprint sits inside each of our genomes so that the one cell that we began with becomes our entire body," Conklin says.

Conklin's goal is to learn how heart abnormalities are created, as he says heart disorders are the most reported birth defect.

And Dr. Flora Vaccarino and her team at Yale University recently became the first researchers to use stem cells to create 3-D models of the brain for autism research.

And they found a likely cause of the disorder is an over-expression of a certain gene.

But these two studies should be highlighted for another innovation –– their use of adult stem cells.

Popular opinion toward stem cell research in the past has been mixed, to put it mildly.

To do research with stem cells, you essentially have to destroy them.

Some argue embryonic stem cells have the potential for life –– so they say stem cell research is an act of murder.

Stem cells exist in living bodies, but how we could use them was limited, especially for organoid research.

"Compared with stem cells from embryos, adult stem cells give rise to a smaller number of cell types –– usually those of the organ or tissue in which they're found," BBC reports.

But what embryonic stem cells provide in versatility, they lack in certainty.

So the source of the cells is living, and if those cells come from a person who has autism or a heart disorder, abnormal activity in those cells can be linked to the disease. (Video via The New York Stem Cell Foundation)

"We're not planning on using these cells to inject them into patients; we're only looking at them to understand the disease and to try to come up with better therapeutics," Vaccarino says.

These adult stem cell models are the most complex yet to actual human tissue –– and are something we can use to find possible causes of diseases.

"The right way to look at this is not to look at the individual gene as the cause, but a variety of genes that affect a single function," Vaccarino says.

Stem cell research still has a long way to go, but work like Conklin and Vaccarino's is creating a buzz and, perhaps, quieting social concerns.