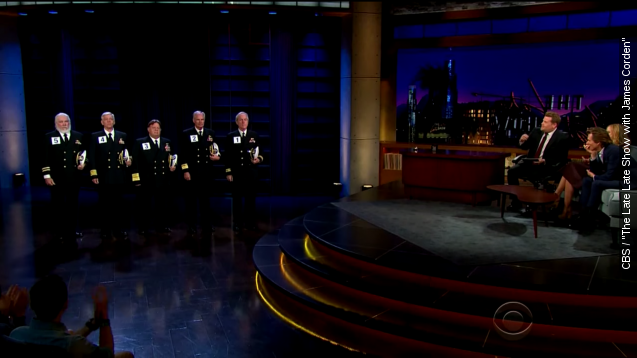 Let's play a game called "See if You Can Recognize These Next Three Segments from James Corden's 'Late Late Show.'"

Reggie Watts asked Will Ferrell, "Will, if you are in the south of France and you pour yourself a nice glass of wine and a beautiful cat suddenly strokes your leg and you are surprised, do you think it's a ghost at first?" (Video via CBS / "The Late Late Show With James Corden")

If you guessed A: "Uh, I think he had a really similar bit on IFC's 'Comedy Bang! Bang!' for 3 1/2 years before joining 'The Late Late Show,'" you're correct!

"Do you think that next year when things are a lot worse, that people will be a little more appreciative of who they are as people as opposed to interconnected data points?" Watts asked Anna Kendrick, who replied simply, "Yeah." (Video via IFC)

On to Segment 2: Know Your Co-Star

If you guessed B, you're kind of right, but the answer is A: "That's like exactly what they do on the BBC panel show 'Never Mind the Buzzcocks.' In fact, I think he's literally done it before."

"Do you want to listen to a bit of music?" Corden asked Jennifer Hudson.

"It depends on what you're listening to," Hudson responded.

Once again, the answer is A: "BBC Radio 1 did this with Taylor Swift in a video that went viral last November!"

Maybe we shouldn't have made the answer A on all of these.

If you guessed right on all three questions, we don't really have anything to give you, other than this analysis:

Corden's been accused of copying other stuff before, including from his current late-night rivals. But some of it works: His carpool videos get millions of hits on YouTube, and it can make for really good TV sometimes.

And the ethics of it all are a little muddled: Joke-stealing is a big no-no in entertainment, but it's not clear if that's exactly what Corden is doing, and he's done a lot of his own funny stuff as well, like broadcasting from some random dude's house.

It's also possible, this early on in his hosting stint, he's still looking for ways to make the show his own. Regardless, as long as Reggie Watts is allowed to be Reggie Watts on network TV, we're not complaining.

This video includes images from Getty Images and music from Kevin MacLeod / CC BY 3.0 and Guy Richardson / CC BY 3.0.