These Head Coaches Are No Strangers To The Final Four 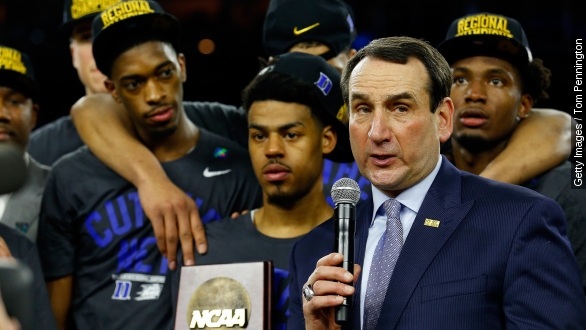 After a wild weekend of nail-biters, overtime thrillers, a borderline unhealthy amount of screen time for avid fans, and general, well, March Madness, the NCAA tournament final four is set.

Three No. 1 seeds will vie for the national title: Kentucky, Wisconsin and Duke — and the one underdog that has pretty much busted most of America's tournament brackets: No. 7 seed Michigan State.

Each of these teams has different strengths: Kentucky has the best defense in the league, whereas Wisconsin has the most efficient offense, just to use one example. But they all have at least one thing in common: coaches with great legacies, especially when the NCAA Tournament rolls around.

All totaled, teams coached by Mike Krzyzewski, Tom Izzo, John Calipari and Bo Ryan have made an astonishing 25 trips to the Final Four.

Three of the four are listed in the top twenty among coaches for Final Four appearances, nestled alongside some prestigious company like John Wooden and Rick Pitino, the latter falling short of his eighth appearance after an overtime loss Sunday.

With Duke's victory over Gonzaga, Coach K. also cements himself right next to Wooden at the top of chart.

The two coaching greats are now tied for the most Final Fours among head coaches in NCAA history with 12 each.

As for Coach K.'s next opponent, Michigan State's Tom Izzo isn't doing too shabby himself.

As USA Today's Chris Chase points out, since 2000, Izzo's Spartans have stormed through the first four rounds of the tournament more times than any other coach in college basketball — at a rate of just about every other year.

However, where he goes from there is a bit suspect. Excluding his championship run in 2000, "Izzo’s teams are 1-6 in the Final Four." So, Chase wonders, "Is it fair to say that Izzo’s teams have had Final Four quantity, not quality?"

But, chief among the coaches remaining in this year's Big Dance, is arguably the most the gifted recruiter in college basketball — and he visits our TV screens in April yet again.

Kentucky head coach John Calipari has lead the Wildcats to the Final Four in four of the last five years. And, he does it usually with an entirely new cast of top talent, as most guys enter the NBA draft after a year of college ball.

As Business Insider points out, "Calipari is basically playing a team full of NBA rookies, which is just far too much talent for most schools to compete against."

We'll see which two of these coaches will move on to this year's championship game when Wisconsin battles Kentucky and Michigan State takes on Duke in Indianapolis next Saturday.