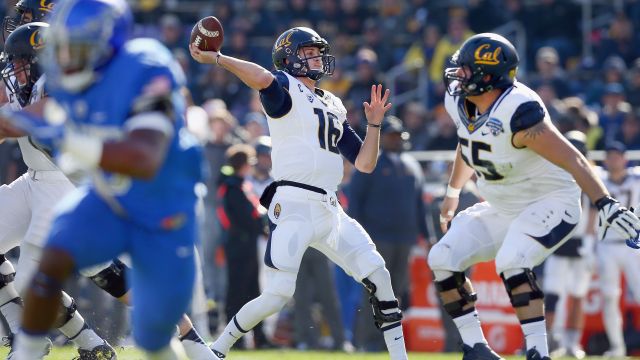 SMS
These Former Pros Think Jared Goff Is The Best QB In The NFL Draft
By Jamal Andress
By Jamal Andress
April 28, 2016
The LA Rams have the No. 1 pick in this year's NFL Draft and all signs point to Jared Goff being the first to shake the commissioner's hand on stage.
SHOW TRANSCRIPT

The Los Angeles Rams have the No. 1 pick in this year's NFL draft, and all signs point to the Rams selecting Jared Goff No. 1 overall.

Former NFL head coach Steve Mariucci explained: "He's a California kid; he's played in the Coliseum before in big crowds. He's got the runner; he's got the defense. I think it's a good fit."

Despite the the Rams being just 7-9 last season, running back Todd Gurley was named offensive rookie of the year.

The Rams hope Goff will complete the puzzle on offense.

"What the Rams have is a run game and a stout defense. So if they can rebuild that offense quickly, at QB ... I think they can be good pretty quickly," former NFL player Mike Mayock said.

And former NFL player Curtis Conway highlighted Goff's impact at Cal. "You look at where he's taken that program. They were 1-11 his freshman year. They went from 1-11 to 5-7, then 8-5."

Jared Goff holds the Pac-12 record for most passing yards and passing touchdowns in a single season. He also broke 26 different University of California football records during his three-year career.