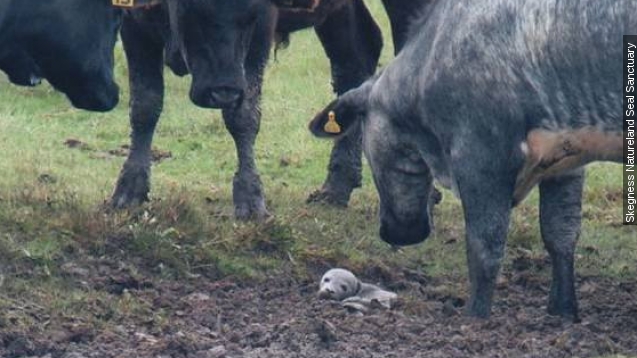 SMS
These Cows Have No Idea How This Seal Pup Got In Their Field
By Matt Picht
By Matt Picht
July 23, 2015
Somehow, a five-day-old seal pup wound up in the middle of a herd of bewildered cattle.
SHOW TRANSCRIPT

Ok, this just looks like a weird day for everyone involved.

On one hand, you've got this 5-day-old seal pup, who somehow washed up in the middle of this field: alone, dehydrated, and surrounded by these 1,000-pound nightmare beasts. Not fun.

And from the cows' perspective — there's something in their field that isn't delicious grass! Clearly, they're not having any of this.

Perhaps most baffled of all is Ian Ellis, a Boston native who was birdwatching on a Royal Society for the Protection of Birds reserve in Lincolnshire, U.K. when he came across this scene.

Fortunately for the seal, Ellis quickly contacted both a RSPB warden and the Skegness Natureland Seal Sanctuary, which responded promptly to get the seal pup into a safe environment.

The rescued seal is currently recuperating at the Natureland sanctuary. And since she was rescued during Natureland's 50th anniversary, her keepers have named the pup Celebration.

This video includes images from the Skegness Natureland Seal Sanctuary and music from Kevin MacLeod / CC BY 3.0.