These Bronze Statues Could Be Michelangelo Works 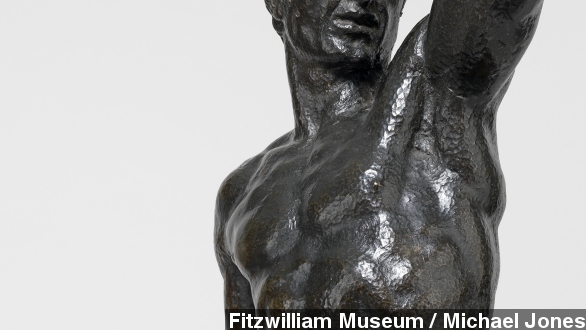 Known as the Rothschild Bronzes, the well-known statues are said to be the only surviving bronze works by the Italian Renaissance master.

Claims to the sculptures' authenticity date back to 1878, when exhibition-goers in Paris rebuked the theory that the bronze sculptures were true Michelangelos. Since then, the sculptures have been credited to a series of lesser-known artists.

Although it's nearly impossible to know who truly created the statues, experts have now been able to find three pieces of evidence they believe irrefutably link Michelangelo to the creative process.

First, visual evidence. Professors at Cambridge first realized the works could be Michelangelo's after finding a set of familiar sketches left behind by one of his apprentices.

Dr. Victoria Avery: "There's the drawing in the museum with the little detail of precisely this composition of a nude use on a panther, and many other works by Michelangelo in the first half of the 16th century show up strikingly similar."

Additionally, the surfaced-based features of the sculptures are said to be so anatomically perfect that the artist would've had a thorough comprehension of medical theory. Michelangelo had a lifelong interest in anatomy.

Finally, neutron images of the cast suggest that the material used in the statues was from the early 16th century. The experts believe the statues were created after Michelangelo sculpted the statue David and before he painted the Sistine Chapel ceiling.

And if the attributions hold up, the statues would, according to the Economist, "become this century's second-most spectacular Renaissance discovery after Leonardo da Vinci's 'Salvator Mundi.'"

And if you want to make the judgement call for yourself, the bronzes will be on display at the Fitzwilliam Museum in Cambridge starting Tuesday.