These Are The Victims Of The Dallas Protest Shooting 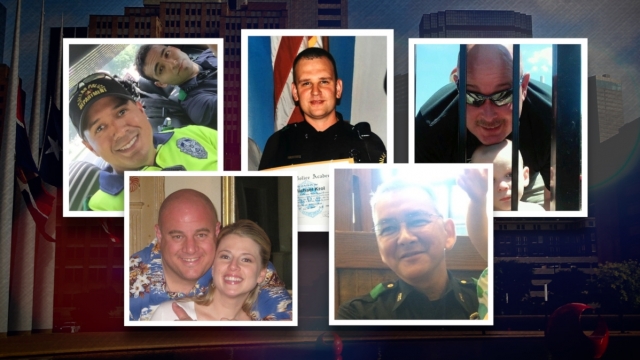 SMS
These Are The Victims Of The Dallas Protest Shooting
By Danny Matteson
By Danny Matteson
July 8, 2016
One of the officers killed had served three tours in Iraq. Another got married within the past two weeks.
SHOW TRANSCRIPT

These are names of the officers killed in the Dallas shooting at a Black Lives Matter protest Thursday.

OFFICER PATRICK ZAMARRIPA, 32: Zamarripa was a Dallas police officer and the father of a 2-year-old. He survived three tours in Iraq.

OFFICER BRENT THOMPSON, 43: Thompson was a Dallas transit authority officer who had previously trained police in Iraq and Afghanistan. He'd married a fellow member of DART within the past two weeks. He became the first officer killed in the line of duty in DART's history.

OFFICER MICHAEL KROL, 40: Krol was a Dallas police officer who formerly worked as a jail officer in Michigan. According to his family, becoming a police officer was his lifelong dream.

SENIOR CPL. LORNE AHRENS, 48: Ahrens was a 14-year veteran of the Dallas Police Department and a former semi-pro football player. He made it through surgery after the shooting but died due to complications.

SGT. MICHAEL SMITH, 55: Smith was a Dallas police officer and a father of two girls. He was a former Army Ranger and had reportedly recently discussed retirement.

Seven more police officers and two civilians were injured in the attack.