Theresa May Could Be The UK's Next Leader; So, Who Is She Again? 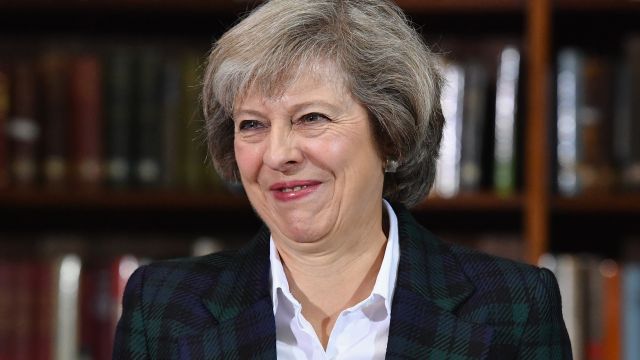 SMS
Theresa May Could Be The UK's Next Leader; So, Who Is She Again?
By Matt Picht
By Matt Picht
July 5, 2016
The U.K.'s home secretary is Parliament's choice to succeed outgoing Prime Minister David Cameron — now she just has to convince the party's voters.
SHOW TRANSCRIPT

The U.K. Conservative Party is scrambling to find a new leader who can guide the country through its breakup with the European Union. But the current top candidate campaigning for the job never wanted the Brexit in the first place.

U.K. Home Secretary Theresa May campaigned for the U.K. to remain in the EU alongside her soon to be ex-boss, Prime Minister David Cameron. Now, she's one of three candidates still in the race to replace Cameron.

As home secretary, May is in charge of immigration, policing and internal affairs. Although she didn't vote to leave the EU, her tough stance on immigration and past skirmishes with EU courts give her some Euroskeptic street cred.

A reputation for tenacity and severity has drawn parallels between May and former Prime Minister Margaret Thatcher — and not always in the best way, either.

Former chancellor Ken Clarke was recorded on a hot mic telling a colleague, "I mean, Theresa's a bloody difficult woman, but you and I worked for Margaret Thatcher."

May is campaigning as a unity candidate who can bridge the Conservative Party's divisions. It's a popular pitch among Conservative lawmakers; the party's initial ballot gave May a commanding lead with 165 votes of support in Parliament.

May's pitch still has to land outside of Parliament for her to win the election. Once the members of Parliament whittle down the ballot to two candidates, the vote goes to rank-and-file Conservative voters, who will elect a new prime minister.

This video includes clips from Channel 4 and the U.K. Parliament.