There's More To Learn About Why Babies Smile 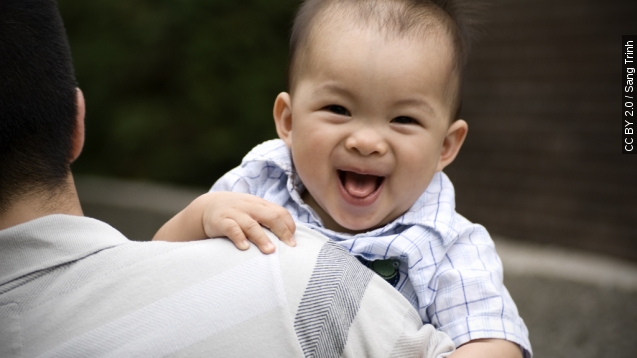 A new study about babies' smiling habits is out, and it might make you rethink your next interaction with a baby.

Researchers studied smiling patterns of infants 4 months old and younger and how adults interacted with them. The findings suggest some unconscious goals are at play.

Put another way, moms try to smile together while babies try to be smiled at.

The researchers aren't saying that either babies or adults are aware of timing their smile for a specific end-game. But they still described infants as exhibiting "sophisticated timing behaviors to achieve their goals."

Anyone else feeling uncomfortable about their next maniacal interaction with a baby? Consider the fact that researchers programmed a very realistic-looking child-like robot to smile at adults. (Video via Hanson Robotics)

Participants rated their experience with the bot more positively when it simultaneously smiled with them, not unlike the preference shown by moms interacting with actual babies.

If you're creeped out, take comfort in the fact that there's still a lot to learn about babies and why they smile. And the approach the researchers used could be applied to future studies on autism and children's social behavior.