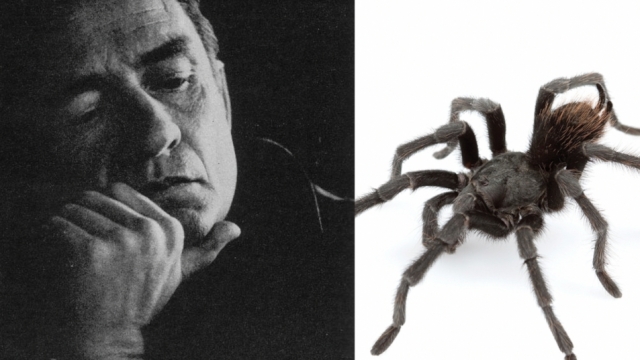 SMS
There's A Tarantula Species Named After Johnny Cash
By Samantha Crook
By Samantha Crook
February 5, 2016
Some new tarantula species were discovered, and one of them lives near Folsom Prison in California. Meet Aphonopelma johnnycashi.
SHOW TRANSCRIPT

If you thought the late Johnny Cash couldn't get any cooler, think again. The Man in Black now has a tarantula named after him.

The tarantula, Aphonopelma johnnycashi, got its new name because it lives near Folsom Prison in California, made famous by Cash's song "Folsom Prison Blues."

"Johnny was kind of a rebel back in the day, and he frightened people. ... But yet, you know, apparently he was an incredibly wonderful man," he told Sky News.

Biologist Chris Hamilton helped with the "taxonomic revision" after new species of tarantula were discovered in the California Floristic Province and Madrean Pine-Oak Woodlands.

He told the BBC, "A lot of people think of new species as coming from areas of the Earth that not many humans have been to before ... but that's really frankly not the case."

Hamilton said one reason the johnnycashi species wasn't recognized earlier is probably because of the similar appearance of female johnnycashi to a different tarantula found in the Mojave Desert.

Full disclosure: The biologist also mentioned in the interview he has a Johnny Cash tattoo. We're guessing this is a pretty great moment for him. (Video via DR)