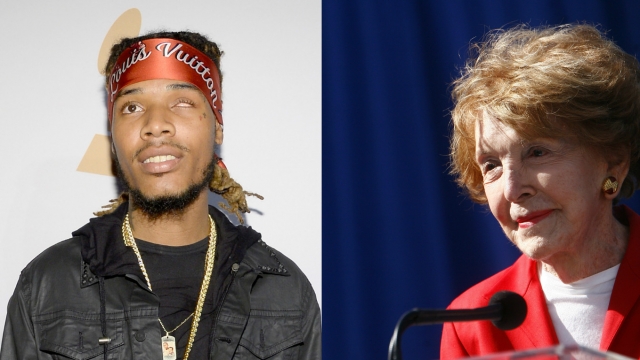 A trap queen, as defined by Urban Dictionary, is a woman who is "loyal to her friends and lives for her family." Yeah, that's one definition anyway.

And then there's the popular "Trap Queen" song by Fetty Wap about the rapper's time selling drugs with his girlfriend. Well, some people apparently want the rapper to perform the song at Nancy Reagan's funeral.

A petition with over 6,000 supporters was started on Change.org. And no, the petition isn’t meant to compliment the late former first lady.

The petitioner claims Reagan is the "most famous Trap Queen in American history" because she led the anti-drug movement while her husband, President Ronald Reagan, allegedly "was linking up with Papi to flood the streets with narcotics" — a reference to a controversial investigative series that accused the CIA of introducing crack cocaine to the black community in Los Angeles.

President Reagan helped launch the war on drugs and implement a zero-tolerance policy, which caused incarceration rates to soar.

The first lady's "Just Say No" campaign, which aimed to address drug abuse, has long been criticized for being overly simplistic in its approach to combating drug use.

Reagan's funeral will be held at the Ronald Reagan Presidential Library in California on Friday.

This video includes clips from CNN and Ronald Reagan Presidential Foundation and Library and images from Getty Images.