There's A Movement To Change The Way We See Handicapped Signs 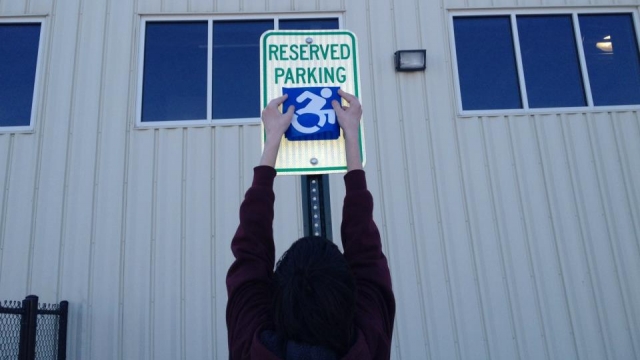 SMS
There's A Movement To Change The Way We See Handicapped Signs
By Melissa Prax
By Melissa Prax
February 28, 2016
The Accessible Icon Project is one of the main groups behind changing the international symbol of accessibility. We spoke to one of their organizers.
SHOW TRANSCRIPT

"When I interact with people with disabilities they are beautiful," Brian Glenney said.

Graffiti artist and philosophy professor Brian Glenney is among activists who aren't proponents of the stagnant wheelchair user displayed in the international symbol of accessibility.

So they're proposing one showing a wheelchair user in motion, something they say is more representative than the emblem that's been used for the past 50 years.

"The only way for our symbol to actually have any traction in the urban environment is for it to take on a similar look as the old symbol of international access. That's why we have to use a chair," Glenney said.

Its website says, "We want to see the icon stand for funding, rights provisions and guarantees, policies, and overall better conditions for people with disabilities."

And it's slowly gaining traction, but a recently proposed bill in Connecticut's House could be a positive push. The state's new signs would include the Accessible Icon Project's symbol and, instead of "handicapped parking," would read "reserved parking."

If it passes, the Connecticut bill would phase the signs in slowly, which wouldn't add extra costs to taxpayers.

But there have been skeptics. Some disability organizations are against displaying a wheelchair user who isn't representative of users who can't move their arms.

"We fully support any effort to use other symbols that designate kind of universal access," Glenney said.

In 2014, New York passed legislation to update signs. And the Museum of Modern Art in New York City had the icon on display. Various cities around the globe have also adopted the symbol.

The Accessible Icon Project's website says, "Our symbol speaks to the general primacy of personhood, and to the notion that the person first decides how and why s/he will navigate the world."