The WNBA Is Sending Mixed Messages On Players' Social Activism 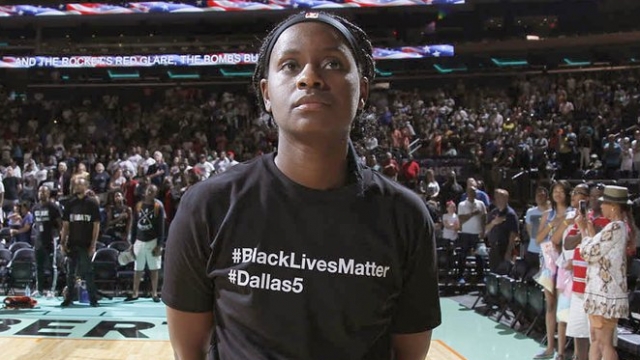 Three WNBA teams and their players are reportedly being fined for speaking out over recent violence involving police, and it's got more than a few people scratching their heads.

The shirts were in response to the fatal shootings of Philando Castile, Alton Sterling and Dallas officers.

But oddly enough, the Minnesota Lynx, who wore different warmup shirts for the same purposes earlier in the month, weren't fined.

The teams' all-black shirts had Adidas logos, the official outfitter of the league. But the WNBA apparently takes pregame warmup uniforms seriously.

In a statement, the league commended the players' advocacy but still fined them because the warmups didn't comply with WNBA guidelines.

Mistie Bass, a player for the Mercury, was clearly unhappy with the WNBA's decision.

The fines come at a time when many athletes are speaking out about recent violence.

"Let's use this moment as a call to action for all professional athletes to educate ourselves, explore these issues, speak up, use our influence and renounce all violence," LeBron James said.

NBA players Carmelo Anthony, Chris Paul, Dwyane Wade and LeBron James took to the ESPYs stage a few weeks ago to urge athletes to do more.

James and the Cavaliers wore "I Can't Breathe" warmups in 2014 after Eric Garner died in police custody. The NBA didn't fine them for it.

Each team that participated was reportedly fined $5,000, while each player was fined $500.

This video includes images from Getty Images, the New York Liberty, the Indiana Fever and the Minnesota Lynx.