The Winner's Guide To Presidential Debates 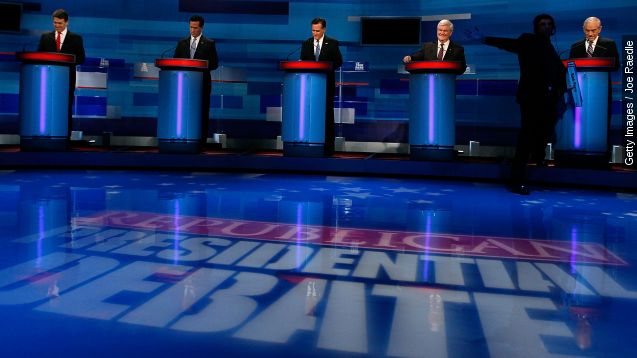 "Who am I? Why am I here?" James Stockdale said at a 1992 vice presidential debate.

A Guide To Debating From The Ghosts Of Debates Past.

Do utilize props — unless the rules ban props. (Video via PBS Newshour)

"This is an attack piece," George W. Bush said at a 2000 Republican primary debate, pulling out a campaign flier.

"That was not by my campaign," John McCain said.

"Well, it says paid for by John McCain," Bush said.

Don't gamble away your campaign.

"I'm not in the betting business," Rick Perry said.

Do exploit your opponents' youth and inexperience.

"I will not make age an issue of this campaign. I am not going to exploit for political purposes my opponent's youth and inexperience," Ronald Reagan said of his opponent Walter Mondale during a 1984 presidential debate.

Don't compare yourself to JFK.

"I have as much experience in the Congress as Jack Kennedy did when he sought the presidency," Dan Quayle said during the 1988 vice presidential debate.

Do pay attention to your body language.

Don't have a 53-second meltdown.

"I will tell you, it's three agencies of government when I get there that are gone. Commerce, education and what's the third one. ... I can't ... the third one I can't ... oops," Rick Perry said during a 2012 Republican primary debate.

This video includes music from Birocratic / CC BY 3.0