The Will Ferrell, Kristen Wiig Lifetime Movie Isn't A Joke 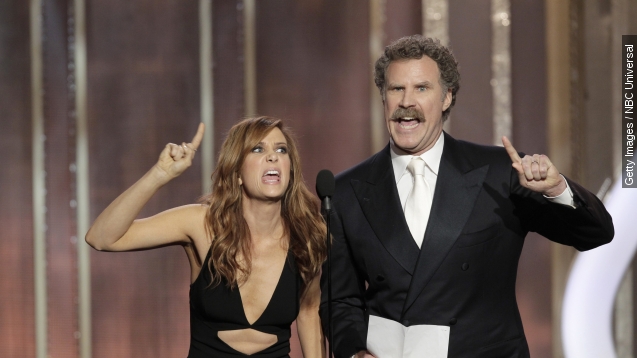 So, here's the deal. News broke on April Fools' Day that former "SNL" and "Anchorman 2" co-stars Will Ferrell and Kristen Wiig had secretly filmed a Lifetime movie called "A Deadly Adoption" that parodies other Lifetime movies.

When that news leaked, Ferrell and Wiig exclusively released a statement to Entertainment Weekly that they were "deeply disappointed that our planned top secret project was made public."

Ferrell said, “Kristen and I have decided it is in the best interest for everyone to forego the project entirely, and we thank Lifetime and all the people who were ready to help us make this film.”

Psyche. Tuesday night, The Hollywood Reporter reported a sighting of a billboard movie poster for the film the entertainment world thought was, for lack of a better word, dead.

The billboard was first spotted on Hollywood Boulevard and features Kristen Wiig and a scruffy Will Ferrell looking solemnly into the camera. The tagline reads, “The birth of a plan gone wrong.”

But this is the bizarre part. The network has remained oddly silent since The Hollywood Reporter first published the sighting. It wasn't until late Wednesday morning that Lifetime confirmed the movie’s existence to Time magazine.

So here's the question: Did Lifetime even mean to post the billboard?

On top of the unusual silence that surrounds a movie involving two of the biggest comedians of our time, the date was wrong on the poster. It says the airdate is Sunday, June 20.

Lifetime also cleared that up for us when it confirmed with Time that the movie will, in fact, premiere June 20.

It’s hard to say why Lifetime has been so ambiguous about this entire project, but then again, maybe Will Ferrell’s idea of marketing a movie is to leak a project, fake his anger over the "leak" and post a billboard to see if anyone notices.

Either way, the saga has brought back interest for the movie, which will premiere as part of Lifetime's 25th anniversary celebration.