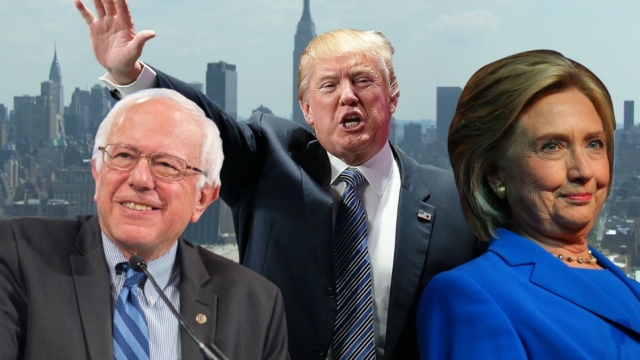 Donald Trump, Hillary Clinton and Bernie Sanders all lay claim to New York City. So who’s the most "New York"?

How does Trump eat his pizza?

"Are you eating with a fork?" asked Jon Stewart.

We don’t know how Clinton eats her pizza, but we do know she buys a lot of it. Her campaign spends a majority of its fast-food budget on pizza.

When it comes to navigating the public transit system, nobody really knows what they’re doing. Clinton recently had some issues with the subway.

"Is this a working MetroCard?" asked a character playing Clinton.

Sanders would have faced similar issues boarding had he tried to ride.

"How do you ride the subway these days?" asked New York Daily News.

"You get a token and you get in," replied Sanders.

Not exactly. And Trump recently likened his private jet to the public transit system.

"I have the ultimate bus, right?" said Trump.

No real winners in this category. In terms of street cred, it’s an interesting battle. Despite none of the candidates having actual moves, all three have racked up a long list of endorsements from powerful musicians, actors and otherwise "cool" people in New York and beyond.

But a young Sanders was arrested protesting for civil rights, gives solid daps, and the unofficial spokesman of the Republic of Brooklyn himself, Spike Lee, is in his corner. Hard to top that.

How about the New York accent? As Vox pointed out, Sanders holds on to an old-school Brooklyn accent; one with "thought vowels" and without R’s.

Trump, on the other hand, holds on to his R’s but drops his H’s. More of a Queens accent but still New York.

Sanders and Trump sound like New Yorkers because that’s where they’re from. Sanders is the son of a Jewish immigrant, born in Brooklyn, grew up in Brooklyn, even went to Brooklyn College for a year before landing at the University of Chicago. After school, he returned to New York before eventually moving to Vermont.

Trump was born and raised in Queens. He built his real estate empire in the Big Apple and has long been a staple of the city.

"It’s always fun to have a guy like you in New York. It seems like they go hand in hand," said David Letterman.

Clinton is more like an adopted daughter. She was born in Illinois, went to college in Massachusetts, law school in Connecticut and lived with Bill in Arkansas and then at the White House in D.C. before finally establishing residency in New York. After winning the 2000 election, though, she spent much of her time in D.C.

So Trump and Sanders are, in many ways, more "New York" than Clinton. But she’s probably going to dominate anyway. Recent polls point to Clinton as the favorite among New York voters.