The White House Wants American Workers To Have Paid Leave 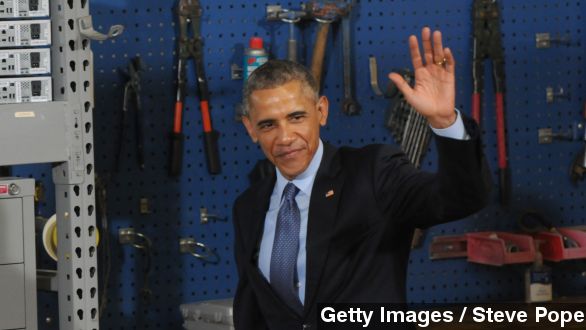 SMS
The White House Wants American Workers To Have Paid Leave
By Jake Godin
By Jake Godin
January 15, 2015
President Obama plans to make a push for greater paid leave within the U.S. workforce, the only Western nation that doesn't have any form of it.
SHOW TRANSCRIPT

Slowly but surely, President Obama is laying out his roadmap for 2015. On Thursday, he will call on Congress to give American workers up to seven days a year of paid sick time.

The move was revealed Wednesday by Senior White House Adviser Valerie Jarrett. In a somewhat unorthodox fashion, she made the announcement on LinkedIn.

The initiative is called the Healthy Families Act. President Obama will also sign a Presidential Memorandum giving federal employees at least 6 weeks of paid sick leave once a child arrives. (Video via The White House)

But the Healthy Families Act isn’t new. It has been sponsored by Rep. Rosa DeLauro of Connecticut since 2005.

Under the plan, companies with more than 15 workers would be required to give employees one hour of paid sick time for every 30 hours worked. According to Jarrett, 43 million workers don't have paid family or medical leave, and only three states currently offer it.

In order to get other states in on the plan, Jarrett told CNN a $2.2 billion incentive fund will be included in the 2015 budget to help up to five states sustain paid leave policies for three years. (Video via The White House)

Out of 185 countries surveyed by a recent report from the International Labor Organization, the U.S. and Papua New Guinea were the only two countries that did not offer paid maternity leave.

Just a week ago the president announced a plan to offer free community college tuition to students. On Wednesday, he called for greater and cheaper access to broadband Internet.

But seeing as Congress is now under Republican control, it’s hard to tell just how President Obama’s recently-announced initiatives will fare as they make their way through the legislative process.

The president will give further details on the plan Thursday while visiting Baltimore and then in his 2015 budget proposal next month.