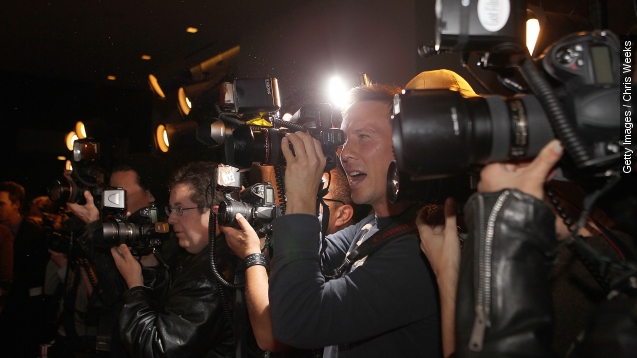 Now, we all know there are some celebrities who just don't like the flashing lights of the paparazzi.

"I don't want to hear paparazzi talk to me or anybody I know. It doesn't matter. No. Don't talk to me at all." (Video via TMZ)

Some stars, like our friend Kanye here, get violent when the cameras get all up in their business.

But others have gone to great lengths to dodge the paps all together. Here are some of the weird ways celebs have avoided the paparazzi.

First, we gotta tip our hats to Taylor Swift on her most recent paparazzo repellent. (Video via Big Machine Records / Taylor Swift)

The singer posted a pic to her Tumblr that showed her walking backwards downhill. Kinda odd, but T Swift had an explanation: "I saw the guy with the camera and wasn't in the mood so I hiked the whole trail backward and my security told me when to make turns."

This next one isn't as weird as it is awesome — enter former lovebirds Emma Stone and Andrew Garfield. (Video via Sony Pictures Releasing / "The Amazing Spider-Man")

The duo were spotted in New York City on several occasions holding signs over their faces to support charities, including the Worldwide Orphans Foundation. (Video via YouTube / ty6ft6)

What a sweet way to tell those cameramen to buzz off. But they weren't the first and certainly won't be the last stars to hide their faces from the paps.

Shia LaBeouf has always been a big fan of paper bags, with or without self-deprecating writing on them.

Ashely Tisdale and Blake Lively have been known to use their canine pals to shield their perfect mugs from the cameras.

And Justin Bieber wears masks both on stage and on the streets to conceal his true identity. We'd never guess that was you, Justin. (Video via YouTube / maddie buffardi)

Even more extreme still — some celebrities will pack up and move to remote, secure locations to get away from the paparazzi. Take Julia Roberts, for example.

The actress and hubby Danny Moder raise their kids on a ranch in Taos, New Mexico, to avoid the bright, flashing lights. How do you like her now, paps?!

Still, if all that doesn't work, these camera-shy stars might consider taking a leaf out of Britney Spears's book — shave your head and try to whack those paparazzo with an umbrella. Right? Okay, maybe not. (Video via Zomba Recording LLC / Britney Spears)