The Weirdest Viral Stories Of 2015 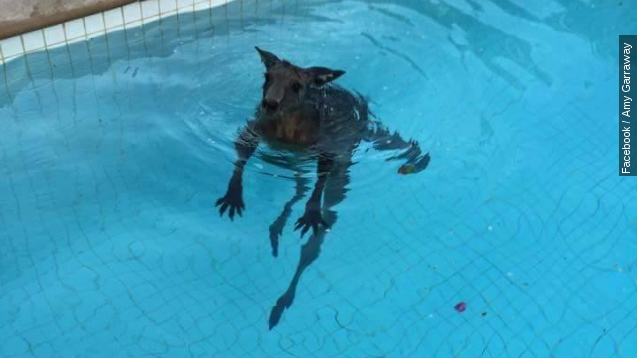 A lot of really strange stuff made headlines this year.

"These are live pictures right now. This is live footage you can't make up. There is no word on who owns these llamas or where they belong," said an MSNBC newscaster.

So, of course, we had to count down our six favorites.

At No. 6, we have a forgetful marsupial.

This kangaroo decided to take a swim in a pool. Then, it remembered it can't swim and got stuck.

That's embarrassing. Only in Australia, right?

At No. 5, another animal, but this one didn't want to go swimming. It wanted some of this stuff:

Gilbert Simpson of Squeaky Clean Windows in Georgia told Newsy his crew noticed a mama bear crawled into their truck through an open window to steal some lunch for her cubs.

Then, she drank three grape sodas and peaced out.

For No. 4, a fun science project. OK, not really. It's weird. Educational, but a little gross.

A mom grew her son's hand bacteria. Yeah, that's what you're looking at.

For No. 3, a marathon runner who decided to not to wear a pad or tampon during her period.

When M.I.A. drummer and feminist Kiran Gandhi ran the London Marathon,  she wanted to prove a point.

Gandhi wanted to destigmatize menstruation and show that women shouldn't be grossed out by their bodies.

As she wrote on her website: "I ran with blood dripping down my legs for sisters who don't have access to tampons and ... sisters who ... hide it away and pretend like it doesn't exist. I ran to say, it does exist, and we overcome it every day."

For No. 2, a woman who decided to make things with her lord and savior official.

She was consecrated to virginity during a ceremony in late summer.

The Diocese of Fort Wayne - South Bend says Hayes was given a veil and ring to show she was a bride of Christ during the ceremony.

"I think that really, in some sense, we're all called to be married. It's just a matter of discerning how. And so, my marriage is to Christ, and someone else's marriage is to their spouse," Hayes told WANE.

In a blog post, Hayes called her now-husband her "Divine Spouse" and said the rest of her life will be transformed by this marriage.

And our No. 1 pick may not be much of a surprise. It broke the Internet more than Kim K's derriere.

Is it black and blue, or white and gold? #TheDress. We're going there.

The question blew up the Internet. It probably divided nations, families, marriages. The debate was seriously that heated.

It was black and blue, by the way. Although now you can also buy it in white and gold, so ... in the end, does it really matter?