The Weapon Republicans Can Use To Push Their Budget 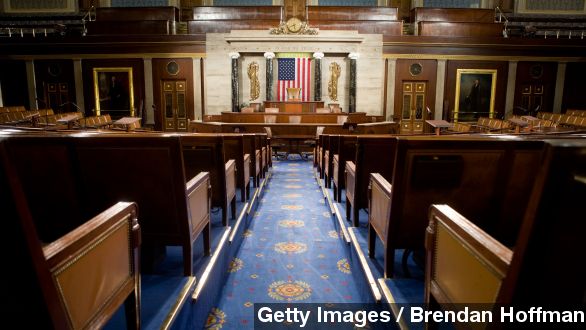 "I'm Tom Price, chairman of the House Budget Committee. This week we're introducing a balanced budget for a stronger America."

House Republicans released a fiscal wish list Tuesday, calling for a full repeal of Obamacare, big changes to Medicare and over $5 trillion in spending cuts.

But despite all the news coverage, their budget is mostly symbolic.

It's true that under the 1974 Budget Control Act, both chambers are supposed to pass a budget by April 15. Thing is, absolutely nothing happens if they don't.

That's because these congressional resolutions aren't binding. They're not law, and they don't get signed by the president. (Video via The White House)

If lawmakers do manage to pass a budget resolution, they still need to pass additional legislation for changes to actually take effect. And that's a big if.

But because Republicans now control both chambers of Congress, this year's budget process could be a little different from what we're used to seeing.

They have a filibuster-proof weapon at their disposal known as "reconciliation."

"We have an opportunity to have a unified budget between the two chambers and do something called reconciliation," Rep. Tom Price said. (Video via C-SPAN)

Remember that it essentially takes 60 votes in the Senate to advance a bill, and Republicans only control 54 seats. But under the reconciliation process, the Republican budget can pass with a simple 51-vote majority.

This rarely used but powerful tool is a provision of that 1974 budget act.

And was last used by the Democrats to pass Obamacare in 2010.

What this means is, if Republicans in both chambers can agree on a joint budget resolution — and there's a good chance they will — they can use reconciliation to get a bill on President Obama's desk.

But in all likelihood, he'd veto it, paving the way for yet another fiscal showdown. (Video via The White House)