The Water You Drink Might Be Older Than The Sun 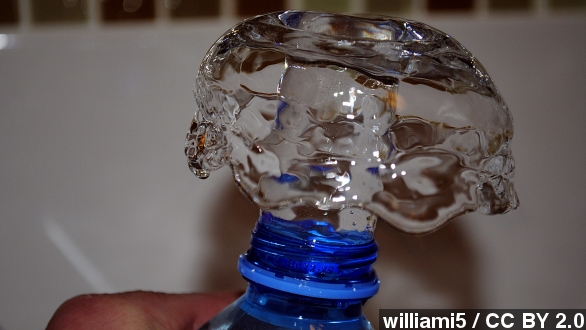 SMS
The Water You Drink Might Be Older Than The Sun
By Mikah Sargent
By Mikah Sargent
September 27, 2014
Researchers at the University of Michigan simulated the birth of planets and our sun to determine whether water in the solar system predates the sun.
SHOW TRANSCRIPT

Astronomers at the University of Michigan believe about half the water in our solar system is older than the sun itself.

As it turns out, there are two types of water — the kind we're all used to, H₂O, and a heavier kind with an extra neutron in the hydrogen atom. We'll call them regular water and heavy water. According to the University of Michigan, "comets and Earth's oceans hold particular ratios of heavy water—higher ratios than the sun contains."

Our solar system was created in what the researchers call a planet-forming disk billions of years ago — dust and gas moved around our sun, eventually forming into our planets. But even before the creation of our eight planets (sorry, Pluto), the sun, and the planet-forming disk, were created in an even older cloud. (Video via NASA / GSFC)

So in a question that's a whole lot like the "chicken or the egg" conundrum, the researchers were curious if the heavy water came from the older, sun-creating cloud or the younger, planet-creating cloud.

How'd they find out? Chemistry, of course. The researchers mimicked the chemistry used in the creation of our planets (the chemical processes in the planet-forming disk), and looked for the appearance of heavy water.

"We let the chemistry evolve for a million years—the typical lifetime of a planet-forming disk—and we found that chemical processes in the disk were inefficient at making heavy water throughout the solar system ... if the planetary disk didn't make the water, it inherited it."

Which means the researchers believe the water had to come from the older, sun-creating cloud. Thus, some water in our solar system is absolutely ancient.

CNET quotes one of the researchers who says the study matters because it gives us potential insights into life on other planets. "If water in the early Solar System was primarily inherited as ice from interstellar space, then it is likely that similar ices, along with the prebiotic organic matter that they contain, are abundant in most or all protoplanetary disks around forming stars."

Translation: other solar systems likely have some of the same water we have, as well as all the stuff in that water.