The Volcano Under Yellowstone Is Way Bigger Than We Thought 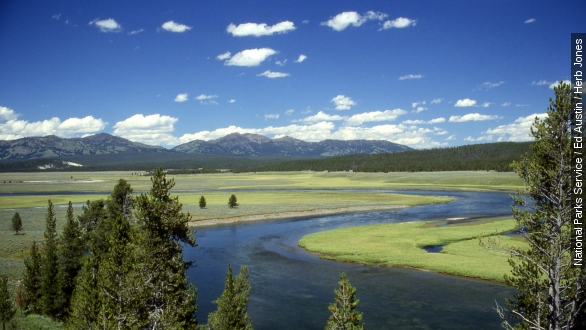 Remember Yellowstone? It's the one with the bison, the geysers, the scenery and, oh yeah, the giant supervolcano.

That last part isn't as well-known, but it's there: an enormous magma chamber stationed directly under the nation's oldest national park.

And here's the news: Scientists at the University of Utah have discovered another reservoir below the old one, and it's much, much bigger.

The new blob of magma measures about 30 miles long, 44 miles wide and at least 12 miles deep. Put together, it's enough magma to fill the Grand Canyon 11 times over. (Video via The World From Above and The Smithsonian)

And for now, it's just sitting there, helping the upper chamber heat up the water that gives Yellowstone its hot springs and famous geysers like Old Faithful. (Video via National Parks Service)

The chamber also pushes on the ground above it, causing the ground of Yellowstone to rise or fall up to 3 inches a year — between 2004 and 2011, Yellowstone was pushed almost a foot higher.

But the volcano is capable of much more — its last full eruption was 640,000 years ago, in an event that covered most of the American West and Midwest in feet of toxic volcanic ash. (Video via CBS)

The supervolcano's epic scale and potential for destruction has made it a popular subject of conspiracy theorists and "what if" movies — something that this newest discovery is unlikely to change. (Video via Naked Science)

But the scientists stress the actual hazard is still the same and the upper chamber we already knew about would be responsible for an eruption. Researchers put the chance of a large eruption in any given year at just 1 in 700,000.